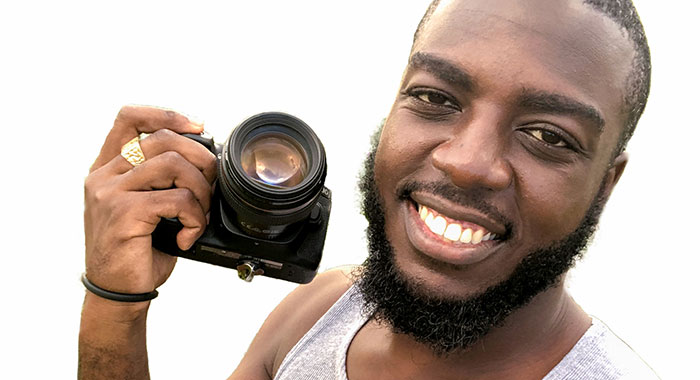 Romain David, a young, Vincentian man, expresses his passions, skills and outlook on education using the famous words of Martin Luther King Jr.: “I have a dream.”

His dream is to promote a new mindset towards education, capitalising on inclusion and diversity of all educational fields.

“There is no one road to educational advancement and there is no field that should be left out of the conversation when discussing education,” David says.

David is passionate about the arts, specifically filmmaking, videography and photography. He believes that every creative person should fit equally into society and be respected for their work, talents and intelligence.

David notes, however, that in today’s society, only one form of intelligence seems to be “accepted”.

David grew up and resides in Richland Park with his parents and two sisters. The younger sister recently placed in the top three in the primary school exit exams, while the other was a recipient of a national scholarship at A’Levels.

He attributes his success and that of his and siblings to the type of mother he has, whom he describes as “supportive in every way”.

“My mom pushes us to excel. She supports our dreams regardless of what society thinks about it. Once it involves education, rewards and mobility, she is on board,” David says.

He further states that he was once into Geography and considered being a geologist, but over a period of time and exploring his skills and passions, he put this aside temporarily. He then got his first DSLR camera in 2015 and even then, wasn’t sure how to go forward.

“I wasn’t fully sure about what exactly I wanted. It took me a very long while before I could’ve actually made money from it. I remember there was a point where I wanted to give up because it was taking too long for me to blow up. But my mother had more faith in me than I had in myself, so I went along with it until I started to make money and was able to expand bit by bit.”

In 2017, he pursued a career in this field and began studies at the University of the West Indies, St. Augustine Campus.

Three years later, David has completed a Bachelor of Arts in in film production and film studies (double major) and awaits his certification at the end of this semester. His overall goal is to work for himself and be an employer, providing an avenue for other creative persons to soar. David outlines his goals for SVG and this field in these words:

“I want to build a studio and a safe space that photographers and videographer/filmmakers can use for an affordable fee. My goal for SVG is to boost the film and media industry. SVG does not have a thriving film culture and I want to be the one to change that. Most videographers get confused with filmmaking and videography. They are not the same thing and that is what I want to teach. I want to give strength to videographers who want to become filmmakers. But most importantly, I want Vincentians to appreciate and support their local films when they are produced. It would take a while but we would get there.”

The aspiring film-maker urges parents, students and educators to give creative students a better chance. “Our intelligence matters,” he says.

David reinforces the point that had it not been for his mother’s encouragement, he would not been as successful as he is today. “Do you really want this Romain? Then think about it and go forward.”

These words from his mother, a retired teacher of 39 years, paved the way for his creative success. He also mentions how the hard work of his teachers propelled him and reminisces on how “miserable” he was in school, recording performances that reflected only an “average student”.

David urges all young persons to find a passion, have a dream and work towards making that dream a reality.

“Education is the key to success, but don’t let your education be defined by society. As long as it involves learning, growing and helping you to become employable, that is education,” David says. He implored persons to work on their weaknesses and mentioned procrastination as his main weakness.

Over the last five years, David has developed his photography business and covered a lot of jobs on campus as a student entrepreneur.

He plans to impact this field locally, regionally and internationally.

David’s finals sentiments were shared in the statements: “This is the start of being great. This is my dream. This is my liberty to break stereotypes and chains that hold back many from advancing creatively and educationally.”