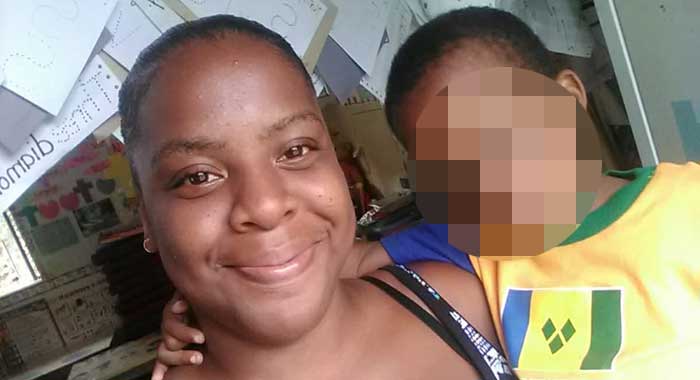 Ocean Edwards says she is hoping for a better life for herself and her son. (Photo: Facebook)

A North Leeward resident who said she dropped out of the Community College because her jobless mother could have no longer afforded to support her says that she is now in her seventh year unemployed.

“I am a graduate of the Troumaca Ontario Secondary School and am in my 7th year of being unemployed. Tonight I am here to lend my voice to the call for a new dispensation. I am here to tell you that now is the time for change in the governance of SVG,” Ocean Edwards told the opposition New Democratic Party’s “Youth Voices” virtual event last week Thursday.

Edwards said she dropped out of Community College because her mom could not afford the cost of tuition, transportation and meals “because she, too, has been unemployed for years on end.

“I couldn’t get a monthly stipend from the National Lottery like some others because my parents are not supporters of the present regime and also I am not friends with who can recommend me for a Lotto stipend.”

She said she had listened to the NDP’s “plans to put back SVG to work. I am convinced that what the NDP is offering are opportunities to take SVG out of its current state of economic dormancy and help us to achieve our full potential.”

Edwards said that as a young woman she feels “the pains of a government that professes to love us but in reality the love is to first hoodwink, then abuse us. They claim to love the poor but their intention is to keep us poor.”

She said that the Unity Labour Party administration has been in office for 20 years and the experience of constituents has been “one of neglect and regret”.

“Our people are among the poorest and most poverty-stricken in the country. Absolutely nothing was done to create jobs in the area. I am sure that this is a similar situation in almost every constituency but it is most profound in those that are currently held by the NDP. The few opportunities that were created are only for persons who can show their red party card,” Edwards said.

She appealed to the nation’s youth “to look at yourselves and tell me what programmes are in place for you from this administration”.

Edwards acknowledged the Promoting Youth Micro Enterprises (PRYME) Programme under which the government is giving grants of up to EC$40,000 to persons to start or expand their business.

She, however, stated: “After 20 years in office, are young people now becoming important? Is it sensible or is it politics to be giving out grants for business development where people spending power has diminished because of the present pandemic?

“Who are going to be my customers if I set up a business? Where are my customers getting the money from to buy what I am offering for sale?” Edwards said.

She said that the NDP would do better for SVG.

“You listen to the political leaders in this country; [Opposition Leader] Dr [Godwin] Friday is out front of the pack in his quest help the young people of SVG. He is reaching out more than ever to offer us the opportunity to spread our wings,” Edwards said.

“Education and training go with us to our graves and the NDP will be advancing the education in our country.”

She noted that the natural sciences — chemistry, physics and biology — are not taught in secondary schools in North Leeward.

“This is the reality after 20 plus years of touting ‘education revolution’,” she said, adding, “The revolution will come when the NDP gets in office and these science subjects are introduced in the schools in North Leeward and students such as my son… can write his CSEC subjects and become a pilot, doctor or engineer.”
Edwards further noted that the NDP has said that it will pay for the school leaving exams of each secondary school student.

“During the sign up period for subjects it is headaches for parents because most of them cannot get the money to pay for the subjects their children qualify to write. With this initiative by the NDP, parents will not be burdened anymore and every student who is qualified will write their exam for free.”

Edwards also lauded the Book Loan Scheme, introduced by the NDP administration, from which, she said, many young people have benefitted.

“The ULP government, over the years, refused to put the adequate monies into the scheme and as a result many students got only a few of the textbooks. I have listened to the NDP and I know this will change as the NDP will make sure the scheme is adequately funded and students and their parents will benefit from this programme and get all their books. “

She further spoke of the opposition leader’s promise to increase the stipend given to persons enrolled in the Youth Empowerment Service.

“The YES programme will be properly managed to give all young people an equal opportunity to get on the programme to get experience and not to be exploited.

It will not be a program that only offers training and experience to party supporters.”

Edwards said she was pleased to hear of the NDP’s thrust in agriculture and fisheries, adding that traditionally, SVG has done well in these sectors.

“They did so at a time when the money was small. Today fishing and agriculture, done the right way, is big business. Together they will create employment, improve economic growth, and provide a decent living to the stakeholders. I am elated about the new ministry of fisheries and marine conservation. I see a bright future for rural SVG.”

Edwards said too many of the nation’s youth are leaving schools and colleges without the hope of finding a job.

“I know going forward things will be better. Let us give the NDP a chance. We have given the ULP almost 20 years and it is not working. The youth unemployment rate is put at 45% and our economy grew less than half of a percentage point in 2019. This will not work; our people need work to do.

“After almost 20 years in office there are no training facilities in rural SVG that cater to the needs of young people. There are several resource centres and several community centres in almost every village but they are not serving the needs of the youth.”

She said she was happy to hear about the proposed cruise ship berth and cable car system from North Leeward, adding that such projects show that a party is thinking outside of the box.

“As a young person, I am no longer in the mood for old talk. I want action. I want to work to buy my own galvanize, lumber and cement; I don’t want to be bribed by anyone at election time. We need jobs so we can take care of ourselves,” she said and urged the nation to give the NDP a chance in office.