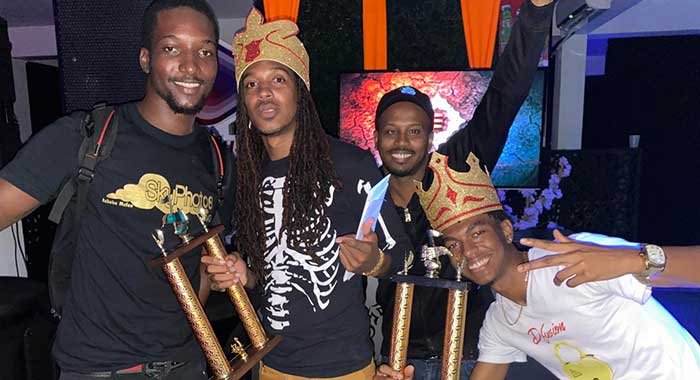 Steve Wallace, one of the organisers of the show, pose with winners in the competition, D’Fusion, right, and ChowMinister.

The organisers of the last weekend’s first-ever virtual soca and calypso monarch competition, says they are pleased with the outcome of the show, which was held as the national competition was cancelled because of the coronavirus pandemic.

“I would say it was good; it I was successful, we had a lot of positive feedback from the public and also from the sponsors,” Candace Sealey, one of the organisers told iWitness News on Thursday.

Sealey said that she found that people were “very receptive with regards to the songs, they thought that the song quality was very good considering the short space and time”.

The show was broadcast “live” on social media, with the Power and Ragga Soca segments premiering on Saturday, and the calypso segment on Sunday.

The calypso segment of the show was constrained to humorous songs, with no such restriction in the other categories.

The preliminaries were held on June 22 and saw ties in the ragga and soca segment having eight finalists, while seven advanced in the calypso segment.

“I think we managed to create a carnival atmosphere within the country even though we don’t have a Vincy Mas, per se,” Sealey said.

Vincy Mas 2020, the nation’s carnival, was cancelled because of the novel coronavirus.

Sealey told iWitness News that organisers were “really impressed” with the calypso night “simply because many persons may think people are not into calypso.

“So we think it was quite successful.”

Artistes competed for an EC$5,000 first prize in the “winner-takes-all” show that saw Chowminister, with his song “Sugar Daddy” winning the soca segment.

He was followed by Sick-O, who sang “JAM-No Cut”, while Tan Dre’s “VIRUS” was third.

In the Ragga Soca segment, D’Fusion won with “Lockdown”, with Chewallee, a former monarch, placing second with “Plenty”. Third place went to Javid, featuring Magikal with their “Road Stamp”.

There was a tie in the calypso competition, which saw the judges unable to separate Chewalee and Shena when “Mas Debating” met “ Quashegunny”.

The duo shared the cash prize.

Third place went to Chico B, with “In Quarantine”.