‘No such swing against Ralph and the ULP’ — Gonsalves 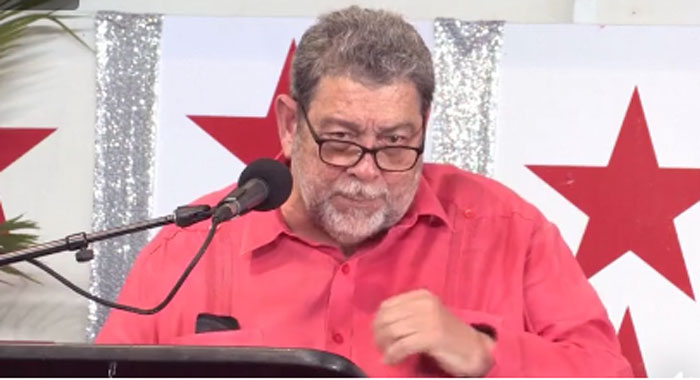 Prime Minister Ralph Gonsalves has dismissed the suggestion by former prime minister Sir James Mitchell that Vincentians will vote the Unity Labour Party out of office because they are “fed up ah Ralph”.

Gonsalves, speaking on NBC Radio on Wednesday, one day after Sir James made his assertion on Boom FM, said there is “no such swing” against his party, as it seeks a fifth term, as Sir James’s New Democratic Party began experiencing in 1998.

The former prime minister had said that an NDP poll had shown that Opposition leader Godwin Friday had outstripped the prime minister and his son, Finance Minister Camillo Gonsalves on “likeability and integrity”.

“… they always talk about polls; we do our polls to,” Gonsalves said, adding that Sir James probably realises that the NDP, which he founded, is heading for a fifth electoral defeat, and  sixth election in which the ULP hold the majority of votes.

“And they realise that if you now go and get a sixth defeat in popular vote and a fifth defeat in seats the NDP will have to do like what The News’ editorial, I have been advised, suggests to them last week.

“The News editorial suggests to them that they should take the option like LIAT, dissolve, wheel and come again,” Gonsalves said, citing the weekly, which he repeatedly claims to have not read in years.

“And when you get the editor of the News to reach that conclusion, though he would have come to that conclusion from a specific matter, you get — look Sir James has been a distinguished leader of this country and he has led the country for quite a long time and I am not going to pour any cold water on any contribution which he has made,” Gonsalves said of Sir James, who was prime minister from 1984 to October 2000.

“But the truth of the matter is this, where the swing appeared against him in 1998 –against him,” Gonsalves said, repeating, “against him” with emphasis, “there is no such swing against Ralph and the ULP. And they can try all the propaganda they want to try.

“Sir James is coming with that because we are a few months away from the election,” said Gonsalves, who has said that elections will be held by year-end, ahead of the March 2021 constitutional deadline.

Gonsalves, however, said that when the NDP loses again, Sir James would chide the party for wasting, fighting the election petition in court, five years that they should use to organise themselves.

“Does anybody know what the NDP stand for anymore? … On a big foreign policy issue, Sir James is in agreement with me to keep the relations with Taiwan. That’s a big issue but he continues to support Friday who is arguing to dismantle this relationship with Taiwan.

“The point about it is this, when you dismantle the relations with Taiwan, you are recalibrating on a number of things to the detriment of St. Vincent and the Grenadines.

“Then they want to sell passport and citizenship. That is the only policy they have. Then we know where that is leading, that is not sustainable. All what we are doing in fisheries, in agriculture and in tourism.”

Gonsalves said Sir James had said he was sorry that he did not do something about airport development during his 17 years in office.

“You could be in power for 17 years and don’t build even a jet airport on St. Vincent much more an international airport? And he turns around in his autobiography and criticised Eustace that Eustace let it sink in the Taiwan Strait.

“Let Sir James come out. That’s all right. He has been a veteran in this business; so is Ralph. Currently, in actual politics in this country, I have been a political activist in the region for 52 years,” Gonsalves said.

Gonsalves said he is in electoral politics for 41 years and is the longest serving parliamentarian currently.

“And Sir James doesn’t like this when people said that Ralph is the longest serving Prime Minister in St. Vincent and the Grenadines. I don’t have any ego thing on these matters and I respect Sir James and I wouldn’t be unduly critical of him, but when he come into the arena and I know a number of them would get nasty and nastier, but you can bring anything you want, my record is there and the vision of the Unity Labour Party is there”

He said Sir James told the NDP after the referendum victory in 2009 “be careful, referendum ain’t general election and Ralph is a hard, hard nut to crack.

“If he think I was hard in 2009/2010, I am harder now to crack. So they can wheel out who they want to wheel out, but I am telling you, the ULP is going to do better than the last time, both in percentage of votes and in seats. And when that happens, the NDP, I don’t know where they are going to go,” Gonsalves said.