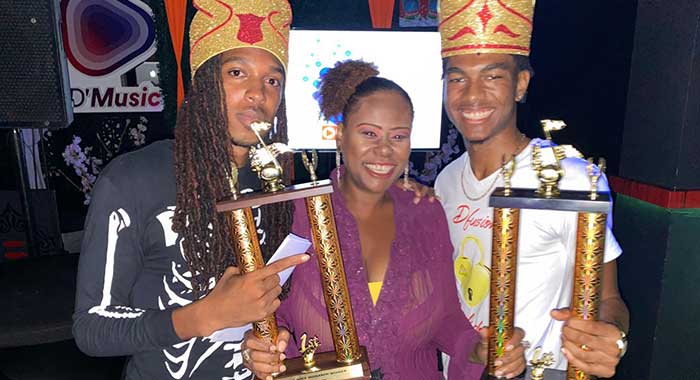 Candace Sealey, one of the organisers of the event, pose with Virtual Ragga Soca, D’Fusion, right, and ChowMinister.

The virtual soca and calypso competition broadcast last weekend, was not a live event, as advertised.

What viewers saw were videos of the artistes’ performances that were recorded days before then broadcast on Saturday and Sunday, as if they were live, organisers of the show admitted to iWitness News on Thursday.

However, Candace Sealey, one of the organisers of the event, denied that she and her team engaged in false marketing, even as the show was repeatedly promoted as a live event, and was broadcast on Facebook “Live” as such, rather than as a “premiere”, which would have indicated to viewers that they were viewing recorded performances.

“Well, it was broadcast live. The actual night itself, on Saturday; because of certain restrictions that were in place, we did not want to have all the crowds there. So there were some recordings that were done previously as live, as in when you record; that was it. There was no redoing or anything like,” Sealey initially told iWitness News on Thursday, when asked if the event was live.

“We could not have everyone there at the same time, dancers, artiste, etc., at the same time on the night,” she said of the show, which was staged as a collaborative effort between her marketing agency, Ignite!, Steve Wallace’s Stv Online, and Lester Iroha’s nightclub, Envy.

iWitness News inquired about whether the show was live after we learnt that the performances had been recorded and artistes asked not to say anything about it.

One artiste, asked earlier if the show was live, said that they could not comment on that, further fuelling speculations that it was not.

iWitness News then told Sealey that our understanding is that the entire show was produced beforehand then shown at the time advertised as if it were live.

“There were performances that were recorded simply because of the COVID-19 restrictions, where we could not have crowds of persons and artistes, everybody on the same night,” she said.

“And our sponsors — because of COVID-19 as well — they wouldn’t have wanted that. And we did have artistes also, especially the older artistes in the calypso genre, who also did not want crowds of people. So it would have been done like the day before. But like I mentioned before, the performances were recorded as is.

“When I say ‘as is’, as in you go up, you performed. If you make a mistake, it goes like that. It’s not edited. It’s recorded and it’s shown back.”

Asked if anyone actually performed on the Saturday and Sunday night when the show was broadcast, “live”, Sealey said no.

“The MC was live, but the performances did not take place on that particular night. It would have taken place on the day before.”

She said that none of the performances were live.

The show had been promoted as a live event and at the beginning and throughout each night of the broadcast, the MC repeated said that the show was live.

iWitness News asked Sealey to respond to the view that the organisers of the show might have misled the public.

“Even though the artistes did not sing that very same night, there was nothing that was touched as it relates to the performances. Absolutely nothing. It was recorded and it was just inserted as live. There was absolutely no editing or anything done.”

It was noted that the show was promoted as a live show and not one where recordings would be shown at a particular date.

iWitness News said that some persons might have gotten the impression that the performances were taking place at the very moment of the “live” broadcast.

“I get what you are saying with that but there were certain restrictions in place. There is only a certain amount of people that were allowed at the venue, there was a COVID-19 situation, the ban on these things have just been lifted to an extent and we could not have that amount of people all in one place with band, stage, dancers, artiste, everybody at the same time,” Sealey said.

Asked why the organisers did not say that to the public, Sealey told iWitness News:

“Because it really hasn’t altered the presentation of the product; because nothing was edited at all.”

Asked if she thought that the public would feel cheated when the information becomes public, Sealey said:

“I guess we see it a different way. We would not see it as they feeling cheated because absolutely no one’s performance was altered in any way, edited or touched in any way at all.”

Sealey said that judges were “there judging live on each night” when the performances took place.

Sealey was unable to comment on an allegation that one of the organisers of the show wrote songs for more than one competitor.

2 replies on “Virtual soca, kaiso show was not live”