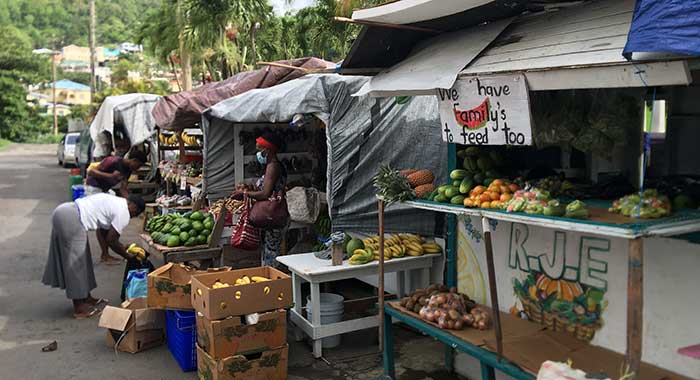 A lawyer and candidate in the next general elections says she will appeal the decision of the government to order the removal of agricultural produce vendors who operate stalls outside Massy Supermarket in Arnos Vale.

On Thursday, the Physical Planning and Development Board, acting under the Town and Country Planning Act, gave the vendors one week (until July 16) to remove the structures they use to operate their businesses.

A letter given to Jamal Farrell, 19, one of the vendors, said that he had been given an enforcement notice on Feb. 23, 2018.

However, Farrell told iWitness News that he had been vending in the area for about two-and-a-half years.

But he said it is not even two weeks since he set up the stall as he used to sell from a bucket.

However, Kay Bacchus-Baptiste, the opposition New Democratic Party’s candidate for West St. George, said Thursday night that Farrell and the other vendors are victims of an attempt to spite vendor Romarl John, of Arnos Vale, for campaigning on behalf of the NDP.

She told iWitness News on Sunday that she will file today, Monday, three appeals on behalf of five vendors in the area.

Bacchus-Baptiste, speaking at an NDP virtual campaign rally where John was a member of the audience, said that he had spoken at each of the village meetings that she had had in the district — before they were put on hold before the novel coronavirus pandemic in March.

“The first meeting we had in Gomea. He made his debut. Never spoke before in a public forum like that, and just spoke from his heart and got the powers-that-be upset,” Bacchus-Baptiste said.

She said that within days, a policeman went to John’s house, arrested him and took him to the Calliaqua Police Station, “ostensibly for a debt that he owes.

“How many persons in St. Vincent owe debt?” Bacchus-Baptiste said, adding that she was able to secure John’s release.

“This is how our people in St. Vincent and the Grenadines — and how many of us suffer this victimisation because we dare to speak out.”

The politician said that setting up “to me, that is almost a cultural situation in St. Vincent and Grenadines where persons will go to get healthy food.

“They, all of a sudden, decide that he must be moved,” she said, referring to John.

Bacchus-Baptiste said that John was initially told on Monday that he has to remove his stall by Friday.

“So I said did you get a letter? Where’s this coming from? No letter. So he said, ‘I am going in to them to find out.’ He went in; no letter.”

Bacchus-Baptiste said that John received a letter on Thursday, saying the Physical Planning and Development Board will be carrying out a demolition exercise in Arnos Vale July 16.

The July 9 letter said that service of the notice is in accordance with Section 18(1) of the Town and Country Planning Act 1992 and reference is made to “the enforcement notice served on” John and his twin brother, Jamarl on Feb. 23 2018.

“Also, the Physical Planning and Development Board would not be responsible for any damages incurred.”

Bacchus-Baptiste, however, said there is a lot more to the situation than what was in the letter.

“They also sent some letters similar to the others in the area. So sorry, they have to get into this because they want to spite and victimise a young Vincentian entrepreneur, but in their letter, the only difference is they don’t put no name and just send notices served on you, owner/occupier, but they identified Ramarl and it says enforcement notice served on the 23rd of February 2020. Well, my research says absolutely no enforcement notice was served.

“This is a wicked government,” Bacchus-Baptiste said, adding that the Town and Country Planning Act says an enforcement notice must be served within five years of when someone starts a business in an unauthorised location.

“Romarl has been there for over eight years … going to nine years and they put this lie in the letter that they served him a notice. When? On the 23rd of February 2018, my people.

“This is a figment of their imagination, because they want to go back and say, ‘OK, if you’re there, let’s pick a date and say you were served with a notice so you cannot say that notice is illegal because no enforcement notice was served,’” Bacchus-Baptise said.

“But the other letter says the notice was served on the 23rd of February 2020. Now these people have been there for over five years, all of them. If you want to serve a notice in 2020, you know, the five years gone, none of them could move, but was Romarl, they say, was served in 2018.

“They’re meaning to say we still have time and you did nothing. They are going to get a hell of a fight on their hands,” the said, adding that she was going to lodge and appeal the following day.

“They must stop victimising our Vincentians. On their radio, you have their talk show host vilifying the young,” she said.

6 replies on “Lawyer to lodge appeal, says political spite behind removal of vendors”