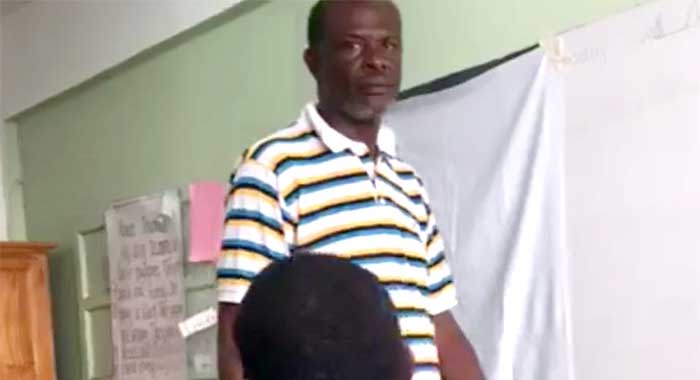 The registering officer, Vibert Pierre, captured in a video Exeter recording during the exchange last week.

The registering officer, who discontinued the registration of voters in Barrouallie after an opposition politician refused to leave the area, has declined to comment on the incident.

“I have given a report to the Electoral Office, so I suggest you talk with the Supervisor of Elections because I have already given my report,” Vibert Pierre told iWitness News via telephone Monday evening.

Benjamin Exeter, the New Democratic Party’s candidate for Central Leeward in the next general elections, said on radio on Thursday that Pierre had previously allowed him to observe the registration process in Layou, but took a differing position in Barrouallie last Wednesday.

iWitness News indicated to Pierre that while we had spoken to the elections chief, Dora James, she was not present when the incident occurred, and, therefore, it could be helpful if he gives a perspective on what transpired.

“I really don’t think I want to go down that road, sir, because I have given my side and I’ve spoken the truth as to what took place there, so — I mean — I think she would say the same thing that I would have said because based on the report I have submitted.”

Pierre said that since the incident, he has been “dragged down into all sorts of things”.

“People — I mean — who were not there, they would say all sorts of things and then everybody taking sides but I know that what I have said, I have given an accurate record of what took place.

“But I don’t want to — I have given my report to the Supervisor of Elections so I am suggesting that you can get the information from her.”

James told iWitness News separately on Monday that Pierre’s report was that Exeter was “was in the registration centre and he should not have been there”.

She said that while Pierre had admitted to allowing Exeter to be in a hall in Layou where registration had taken place, he was not comfortable with the distance in Barrouallie.

Pierre therefore asked Exeter to leave, and ended the registration process after a call to James, when the politician refused to leave.

7 replies on “Registering officer declines to comment on Bagga incident”