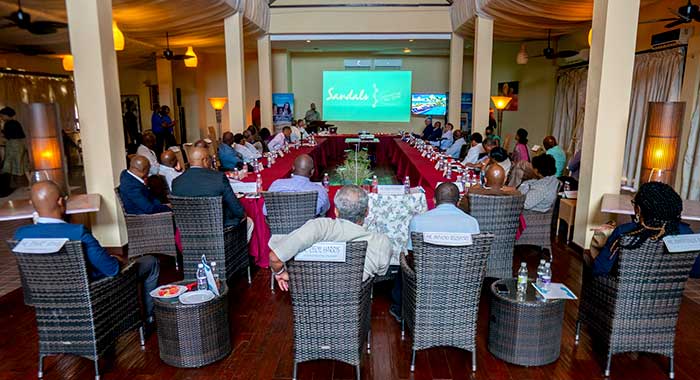 The Beaches Resort that Sandals Resorts International will operate at the former Buccament Bay Resort property in St. Vincent and the Grenadines (SVG) will employ 700 Vincentians and purchase 700,000 pounds of produce locally.

Minister of Finance Camillo Gonsalves made the disclosure on Wednesday at a ceremony at Buccament Bay, where the government of SVG and Sandals signed a contract for acquisition of the property.

Gonsalves said the agreement is that Sandals will construct a 250- to 350-room, family all-inclusive resort called Beaches on the premises.

This compares to 124 functioning, operational rooms at Buccament Bay at its peak.

“And that, in and of itself, is a remarkable opportunity for growth and development here in St. Vincent and the Grenadines,” Gonsalves said in an address at the event.

He said that Sandals also commits to spending a minimum of US$100 million for the rehabilitation and construction of the beaches resort in St. Vincent.

He said that Sandals made it clear that they want to deal with local businesses and suppliers.

The contract also says that Sandals will procure locally produced agricultural goods and seafood from Vincentians farmers and fisher folk subject to the availability and quality.

“And we, repeatedly in this document, commit the Sandals corporation to not import all their food from Miami or elsewhere, but to buy their food and their fish from Vincentian farmers and Vincentian fisherfolk.

Gonsalves said that the Sandals property at Buccament will require 700,000 pounds of fruit and vegetables every year.

“I want the farmers and the fisher folk to understand that a massive market for your produce is now sitting in your midst. “You don’t have to call a trader or trafficker to take some boxes down to Trinidad or across the Barbados or up to the BVI.

“There is a market right here that wants to buy 700,000 pounds a year of fruit and vegetable and fish, from the farmers and fisherfolk of St. Vincent and the Grenadines. That in itself is transformative,” Gonsalves said.

He said that while the contract says that the resort would employ approximately 700 Vincentians, a closed-door presentation given on Wednesday said that in the construction of this facility, Sandals will employ over 800 locals.

Sandals is expected to send US$8 million in VAT to the national coffers annually, “without saying anything about other contracts that have been signed,” Gonsalves said.

He said there are many agreements with major hotels that exempt them from VAT all around the Caribbean, but SVG will get US$8 million in VAT.

“Similarly, there are a lot of agreements that exempt them from excise tax, but, over time, US$500,000 of excise tax will be generated by this facility.

“Between 25 and 34 million US dollars will be spun off in the tourism sector not generated directly here by employees. But they’re talking about the taxi drivers and the tour operators and all of the ancillary services that support a major tourism facility of this size.”

He said that the water and electricity companies will get US$3.5 million annually and departure tax will exceed US$500,000.

“The people at Sandals tell us that when this 350-room facility is built, don’t think of it as 360 guests because the Beaches brand is a family brand. It’s designed for mommy and daddy and the sons and daughters and grandparents to come and enjoy a family vacation together.

Gonsalves said that Sandals has indicated that once the hotel is complete and they start to advertise internationally, between television and social media, there would be over 10 billion references every year to SVG.

“This facility, after being shuttered for three and a half years, will rise to beyond what we originally imagined the upper limits of its capacity to be. We’re very excited about the development today,” Gonsalves said.

Buccament Bay Resort closed in December 2016 when its electricity supply was disconnected. Workers had been protesting for months before this over the non-payment of wages.

Gonsalves told iWitness News that Sandals has communicated  a targeted opening date to the government, but has asked that it not be disclosed “given the uncertainties related to COVID”.