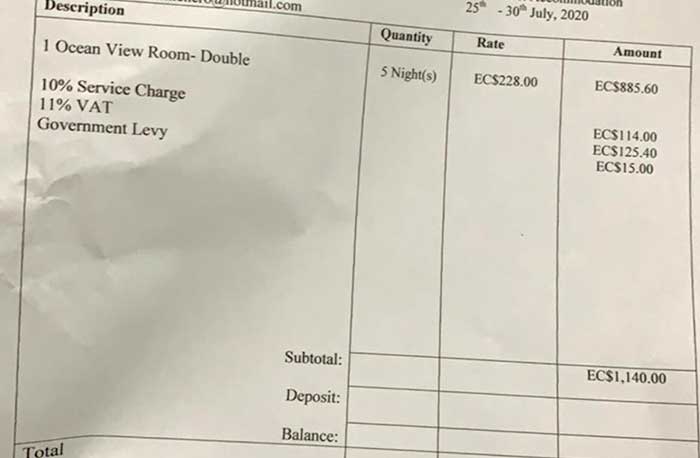 A number of returning Vincentians felt the financial impact, last Saturday, of the last-minute protocols put in place by their government, which required them to spend five nights in a hotel, at their expense, as a result of the COVID-19 pandemic.

The government announced the new protocols after the country recorded 19 cases of COVID-19 linked to the first two American Airlines flights from Miami on July 11 and 18 — the first flights since the air bridge was closed in March.

“I sent my hotel quarantine bill to you. I feel it for locals who do not have the money to pay this and had to pay it or their passports will be seized,” a Vincentian-American told iWitness News Saturday night.

“The hotel bill is too much. I saw two ladies sitting outside waiting for someone to come pay their hotel bill. A lady with two kids had to wait for her husband to pay the bill.  She had her teenage daughter and 1-year-old son,” one returning national told iWitness News.

“There were people, Vincentians, who have their homes that are forced to pay this money. They were brought here and had to wait outside for family members to bring money to them,” the national said.

The source told iWitness News that there were police officers stationed at the hotel and the in-quarantine guests could only receive food from their relatives.

“We are not allowed to give our family anything we brought for them.”

iWitness News was reliably informed that one person who returned home for the funeral of a close relative was only allowed to give the burial suit they brought from the United States to their St. Vincent-based relatives after pleading with police officers to contact their superiors and seek permission to do so.

“This is insane. And the people who broke quarantine from previous flights are not being reprimanded,” another returning national told iWitness News.

The national was referring to the refusal of the government to use against quarantine breakers the amendment to the Public Health Act that was passed in Parliament in April for that specific purpose.

The government had said that it prefers to use moral suasion than to use the law in its attempts to justify non-enforcement of the law, which could see persons fined as much as EC$2,000 for each day that they breach their quarantine.

The source felt that other returning nationals were being punished for the actions of their fellow citizens who had breached the quarantine without consequence.

They said that a government employee had been among the alleged quarantine-breakers.

“Cops here with guns like we are criminals,” the national said and expressed hope that local health officials could expedite the COVID-19 test conducted locally that would determine when their quarantine ends.

SVG has recorded 52 cases of COVID-19, with 39 of the patients having recovered from their illness. There has been no death linked to COVID-19 in SVG.