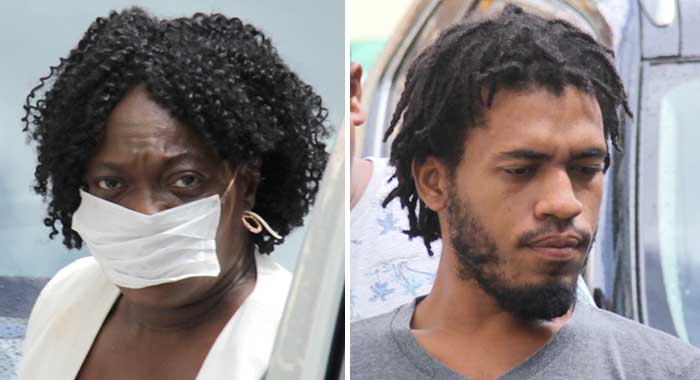 The duo charged, on Monday, with theft of EC$389,155.95 from the Bank of St. Vincent and the Grenadines (BoSVG) was, on Thursday, slapped with proceeds of crime and money laundering charges.

At the Serious Offences Court in Kingstown, on Thursday, Yvonne Patterson, a 46-year-old BoSVG clerk, and Fitzroy Douglas, a 27-year-old mechanic, each pleaded not guilty to the separate charge that between June 1 and July 24, 2020, at Kingstown, they entered into or became concerned in an arrangement which they knew or suspected, facilitated by whatever means, the acquisition, retention, use or control of criminal property by or on behalf of another person to wit the sum of EC$389,155.95 deposited into BoSVG account number 148014 in the name of Fitzroy Jr. Izarus Marcus Douglas, which they knew of  or suspected, in whole or in part directly or  indirectly represents that proceeds of criminal conduct.

Patterson, a Green Hill resident, also pleaded not guilty to a charge that between June 1 and July 24, 2020, at Kingstown, she disguised criminal property, to wit the sums of EC$389,155.95 deposited into Douglas’ account.

Douglas also pleaded not guilty to a charge that between July 5 and July 26, 2020, at Kingstown, he had in his possession criminal property, to wit a silver Toyota Sprinter car, PS996, which he knew or suspected, in whole or in party, directly or indirectly, represents the proceeds of criminal conduct.

Douglas, a Murray’s Village resident had on Monday pleaded guilty to theft of EC$389,155.95 from the bank, while Patterson pleaded not guilty.

Patterson also pleaded not guilty to two charges that she dishonestly, with a view to causing loss to BoSVG, falsified the record of deposit to Douglas’ account in the sums of EC$53,571.95 and EC$335,584.

Chief Magistrate Rechanne Browne had further ordered him to surrender his travel documents and to report to the Central Police Station every day between 6 a.m. and 6 p.m.

However, his co-accused was denied bail as the court granted an application by the persecution, which argued that Patterson could interfere with the investigation, if granted bail.

On Thursday, Senior Prosecutor Adolphus Delplesche said the Crown was waiving its objection to Patterson’s bail.

The senior prosecutor told the court that the lead investigator, Detective Sergeant Biorn Duncan, had indicated that he had all his bases covered and had no further objection to the defendant’s bail.

“In three days, all bases covered,” Delplesche said, and the chief magistrate commented, “I expected no less”.

“You did well, Duncan. Very well. Extremely well,” Delplesche told the detective who is often commended in court for the thorough but speedy investigations.

The prosecutor, however, requested a month before the trial, saying that the investigator had submitted the file, which had began its journey through “the proverbial channel” on its way to the Office of the Director of Public Prosecution.

Grant Connell, who replaced Jomo Thomas as Patterson’s lawyer, rose and told the court that on the issue of bail, he would like to offer the guidance of the case of the Commissioner of Police versus Tamara Gibson-Marks, which he noted was not binding on the court.

In August 2014, the Kingstown Magistrate’s Court granted Gibson-Marks, a former registrar, EC$30,000 bail on a charge that she stole EC$21,925 as well as abuse of office and false certification charges.

The chief magistrate set Patterson’s bail at EC$300,000 with one surety and ordered her to report to the Central Police Station on Tuesdays and Thursdays between 6 a.m. and 6 p.m., surrender her travel documents and seek the permission of the court to leave the state.

But Connell, on hearing the bail conditions, told the court that his client has significant ties to the jurisdiction and is not a flight risk.

He said that the bail sum of EC$300,000 is a significant amount that the average Vincentian might not be able to meet.

“And if I may humbly submit, there is case law that bail and surety amount should not be a punishment,” he said.

The lawyer said that if Patterson is unable to secure a surety, she would be going back to prison.

Connell said that his client is already impacted by the “corrosive effect” of the charges and that he has doctor’s report that suggests that patters had suffered two strokes in the past.

On Monday, Patterson had to be assisted as she made her way to and from the police vehicle and into the dock in court.

She walked with a pronounced gait akin to someone who had had a stroke.

On Thursday, her gait was still pronounced, but she was able to walk and enter the dock with minimal assistance.

The magistrate, on hearing the lawyer’s submission, amended the bail conditions to EC$300,000 with two sureties.

Connell asked whether the prosecution would object if the bail amount were reduced.

However, the chief magistrate maintained the amount and number of sureties.

Douglas would be sentence in connection with his guilty pleas at the end of Patterson’s trial.

The next hearing in the case is set for Oct. 5