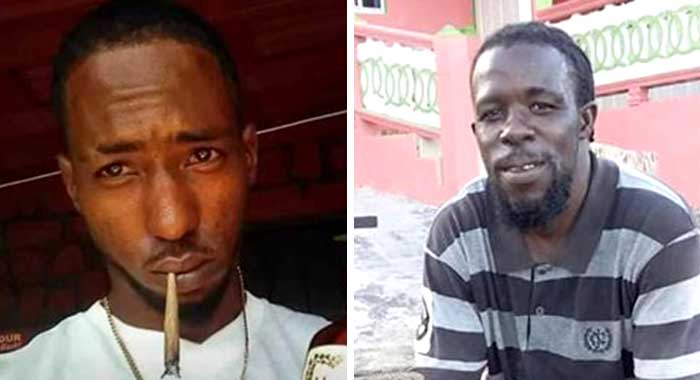 Jun Abbott, left, died Saturday morning in Langley Park after being shot by police and Kimron “Warlord” Hannaway is said to have been shot and killed by another civilian in Block 2000 Sunday morning. (Internet photos)

Two men were shot and killed in separate incidents on the weekend, one of them at the hands of police officers and the other by another civilian.

On Sunday, police responded to a report of a shooting in Block 2000 (Old Montrose), where they met a resident of the Central Kingstown community dead with what appeared to be bullet wounds.

Police have identified the dead man as Kimron “Warlord” Hannaway, 28, of Block 2000.

iWitness News understands that Hannaway has been contracted to trim a yard in Block 2000.

He is said to have gotten into a dispute with another person, who reportedly shot him about 8:45 a.m.

Meanwhile, a man died in Langley Park on during the pre-dawn hours of Saturday morning after being shot by police.

In a statement Saturday night, police said that sometime between 2 a.m. and 3 a.m. that day, a group of police officers were returning from “a function” when they saw Jun Abbott “who is known to the police, walking along the Langley Park Public Road.

“He had what appeared to be a gun in his right hand. The police alighted the vehicle, identified themselves to the deceased and shouted, ‘Stop and drop your weapon’.

“The deceased did not obey the police command, but instead – turned around and open fire at the police,” the police public Relations & Complaint Department said in the statement.

The statement said that the police officer returned fire and the deceased began to run.

“The police gave chase after the deceased. Upon reaching in front of his place of abode, the deceased turned around and again opened fire at the police. The police returned fire and shot the deceased in his right thigh.

“The deceased then ran to the back of his house, scaled two walls and escaped from the police. A party of police officers from the Georgetown Police Station later joined in on the search for the deceased. His body was subsequently found in some bushes approximately 400 yards from his house,” the police statement said.

The statement said that an autopsy will be carried out on the deceased to ascertain the cause of death.

“A coroner’s inquest will also be conducted to look into circumstances under which the deceased died.

“Commissioner of Police, Mr. Colin John expresses condolences on behalf of the Royal St. Vincent and the Grenadines Police (RSVGPF) to the family and friends of the deceased,” the statement said.