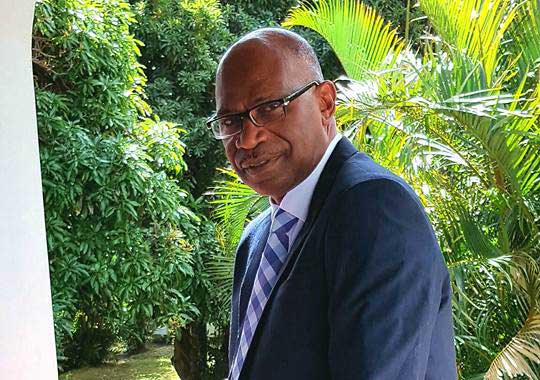 KINGSTOWN, St. Vincent (CMC) — The Association of Caribbean Media Workers (ACM) Tuesday said it was “shocked and sad” at the death of veteran social activist and broadcaster, Jerry S. George, while hosting his early morning internet show, “Early in the Morning with Jerry S. George”.

George, who was in his 60s, was a former public relations manager with the telecommunication company, Digicel, died of an apparent heart attack soon after introducing his first guest on the show on Tuesday, which he had dubbed “Thoughtful Tuesday”.

His guest, Jamaican-born, Grenada-based journalist, Beverley Sinclair, who is also the chief operations officer of George’s Island Media Marketing & Communications company, had been invited to co-host the programme as George had indicated to listeners that he was going to “step out of frame”.

But after speaking for nearly half an hour with no response from George, she told viewers she had no idea “where my host is; he has abandoned me.

“And I need him to come back at this point so we can share some of your comments, hear what you had to say and how you deal with people that you come across in your daily life — what kinds of experiences have you had…”

But a Facebook post on Valerie Tucker-George’s account after the scheduled close of the programme, announced, “I am still in shock, came home at about 7:20 am (local time) and met my husband, Jerry George on the floor dead.”

George was a vocal social and political commentator on issues not only in his homeland but also throughout the Caribbean and further afield. Among his last postings were the ongoing political situation in Guyana and the decision by some Caribbean governments to introduce competition in the aviation sector at the expense of the cash-strapped regional airline, LIAT.

His Facebook page has been flooded with messages of condolence with some people saying they were “still in shock” at the news of his death.

He is survived by his widow and two adult children.