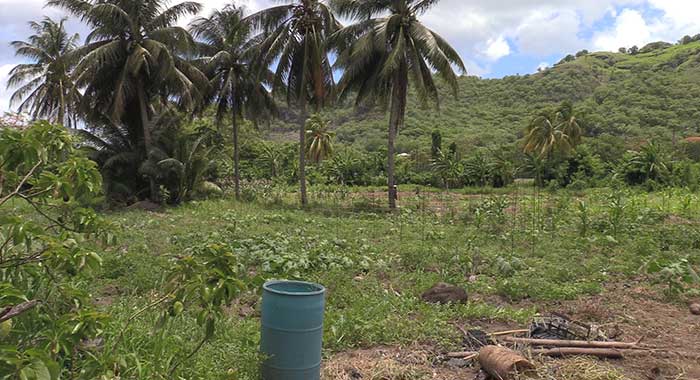 A harm plot near the resort. (iWN photo)

The Unity Labour Party government will pay farmers near the resort in Buccament Bay EC$12 per square foot for lands it has compulsorily acquired close to the resort that and will sell to Sandals Resort International.

Prime Minister Ralph Gonsalves made he announcement on NBC Radio on Wednesday, during his weekly show.

The prime minister also said that the state will pay the same price to the Catholic Church, for land in the area, but further than the farms from the resort.

He said that his government has concluded an agreement with the Catholic Church to buy six acres of land located near Duncan’s Furniture in Pembroke.

The Catholic Church had initially earmarked the land for the construction of a school but has since decided against it.

The church lands are located closer to Greaves Marketplace, while the farms boundary the resort.

Gonsalves said that his government has also “agreed to about six acres from Bernard Punnett” — a major landowner in the area.

There are four farmers located near the resort who had refused to sell their lands to Harlequin — the company that originally owned the resort — about a 14 years ago, when construction of the resort was announced.

Gonsalves said his government has reached agreements with three of these farmers.

“One of them, as you know, in the public media say that he wants more money. Well he has 1.45 acres of land I understand. He’s getting $12 dollars a square foot like everybody else,” Gonsalves said.

He was referring to Shaka, who told iWitness News that while he would prefer to retain his land and farm, he will not stand in the way of the project, but wants EC$1.5 million for his land.

Shaka had refused an offer of EC$1.4 million 16 years ago, before construction of the resort started.

Gonsalves said that of the other three farmers, one wants cash alone and the government will pay him $12 a square foot for his 80,000 square feet of land.

He said the other two farmers were close together and have between them 2.7 acres of land.

“… they want two acres of land replacement. And they want payment for the 0.7 or thereabouts…” Gonsalves said, adding that the government has agreed.

“They live together in a four-bedroom, wooden house. They would now want instead to get two separate two-bedroom houses.

“Well, when we move in people in any case and you have a house, we build you back better.  That’s not a question of direct compensation. That is something with our housing policy,” the prime minister said.

“But they said that the land — we had offered them of other land which we had acquired because we acquired 46 acres — because I’m told that Bernard Punnett wanted some land back in exchange and some money.

“And I was told that two of the farmers wanted land in exchange. But the two acres which we had put aside there for them for exchange, when they look at it, they say, well, they don’t think that is as good farmland as what they had before but it’s good land maybe for building and the like.”

The prime minister said that the farmers indicated that the Catholic Church had good farmlands in the area.

“So I called the bishop right away and set the thing in motion and two of the acres there, they will get. Never mind you hear all this talk, talk. I’m letting you in to as much detail as is necessary.”

Gonsalves said he has plans for the remaining four acres of the six his government is purchasing from the Catholic Church.

“… and you will hear about that plan at some other time.”

He said that his government will take to Parliament today, Thursday, a supplementary appropriation bill in relation to the acquisition of those lands.

“And for money to purchase the lands from the Catholic Church, I would just want to say that by the end of November, that money should come back to us from Sandals in accordance with the agreement, which we have.”

He said that Sandals has made a down payment of some US$1.75 million, representing 10% of the agreed price for the resort.

“There are two ways we can do this bridging loan — bridging money. We have some money available to us at the Central Bank; we can take that and pay that for that short period of time. Or we can just borrow for the short period of time as a bridging from the Bank of St. Vincent and the Grenadines.

“And I know my team is talking to the bank about what would be the interest rate for that period of time. If we don’t get an interest rate which suits us well, I have money I can get that the central bank for the temporary funding. But the amount of work which is required to bring us to this point is absolutely incredible amount of detail work,” the prime minister said.