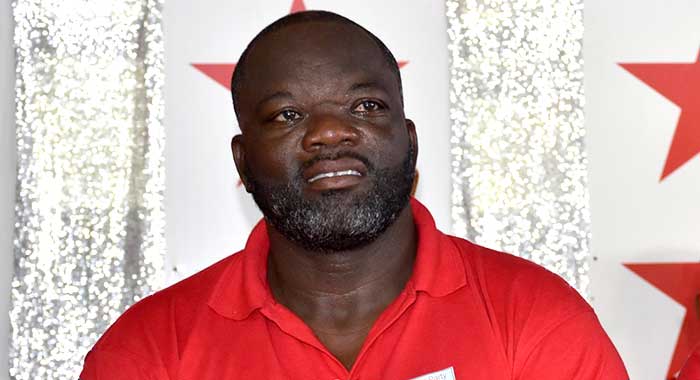 The ruling Unity labour Party’s candidate for West St. George, Curtis King, on Wednesday, used his inaugural speech as the candidate to present himself as having strong and long-lasting ties to the constituency that make him fit to be its Member of Parliament

“I am neither a bird of passage nor ‘a fly- by- night’ resident, not me! I emerged from the bowels of our wonderful constituency of West St. George,” he told the ULP’s first virtual campaign meeting, broadcast on social media, radio and television.

“That is why I am in a great position to understand the issues that confront our residents in West St. George and to represent their interest at all levels,” said King, who comes to politics on the heels of his retirement after a four-decade career as an educator.

“This is your son, a humble member of West St. George,” King said who will face off in the polls with lawyer Kay Bacchus-Baptiste of the main opposition New Democratic Party (NDP)

He pointed out that he was born in West St, George and has lived here all his life.

“My character was shaped and nurtured in West St. George,” he said, noting that he attended the Belair Government School and spent his early teenage years working with youth and community organisations such as DUESO (Dauphine), FAYN (Fountain), GMYF (Dauphine and Ashburton), TBPO (Belair), GYPA (Gomea) and “the parent of them all, Belfongo”.

King said he subsequently worked with AVESCO (Arnos Vale) and ASCO (Ashburton) after he became president of the now-defunct National Youth Council.

He said he played cricket for the Belfongo and Belmont Methodist Youth Fellowship cricket teams in the National 2nd Division Cricket competitions.

‘in building the capacity of the individual’

King said he taught at both the Gomea Methodist School and the West St. George Secondary School.

“And when it came to choosing a wife, I had no hesitation in marrying a beautiful, wonderful woman, from where? Gomea, in West St. George.

“My professional experience as an educator of 37 years and my voluntary work as a youth and community activist since 1982 have provided me with the life skills needed to work with all ages in the constituency: the young child, the adolescent, the teenager, the adult and the elderly.

“I believe in building the capacity of the individual so that he can help himself. I hold strong to the view that everyone has the ability to achieve his or her true potential. And while we all need help to do so, some need more help than others to do so.

King said that in this context, it is clear to him that of “the two political parties” in St. Vincent and the Grenadines (SVG) today, “the ULP is the one that offers quality leadership; it is also the one more capable of providing the enabling environment that is required for success.”

He offered two examples:  “the bold and creative leadership that delivered an international airport in the midst of the worst global economic meltdown since the 1930s; and the provision of an enabling environment for our students and teachers to create a revolution in education”.

King said that under the NDP — which was in office from 1984 to March 2001 — only about 20% of the under-5 age cohort were exposed to a pre-school or early childhood education.

About 40% of primary school children went on to secondary schools while an even smaller percentage gained access to post-secondary and tertiary education.

“They, the NDP, promised to introduce universal access to secondary school in 2030! The ULP has created the enabling environment to enable 90% of pre-schoolers to attend preschools; there is universal access to secondary education; that is 100% of our primary schools have the opportunity to attend a secondary school since 2005 while an integrated Community College caters for all students who meet the requirements for entry.

“And to crown those opportunities, the government gives scholarships, exhibitions and bursaries to all students who meet the matriculation or entry requirements to university,” King said.

ULP shares ‘my values and hope for our people’

The retired educator said he had “a front seat in the vehicle that was charged with transporting what I used to call the series of initiatives which if implemented properly, will lead to a revolution in education. That revolution has long arrived and is being consolidated!

“I had no choice, therefore, but to join the party that shared my values and hope for our people, especially our young people. For the last 19 years, the ULP has been engaged in a programme of transformation in every aspect of the Vincentian life; in education, in health, in physical infrastructure, in sports and culture, you name it. It has been a virtual revolution that has impacted our people in a positive manner.”

He said citizens are proud to be Vincentians “because of our achievements, locally, regionally and internationally.

“Today this tiny nation earns great respect in the international community as a non-permanent member of the UN Security Council. Today this tiny nation gains tremendous respect in the Caribbean region because of its demonstrated commitment to regional integration and nationally, we feel good to be Vincentians because of the quality of our teamwork that produced a bridge over the Rabacca River, construct an international airport by spanning rivers and blowing down mountains and valleys .

“This Unity Labour Party has been nothing short of magnificent in its performance.”

He said that transformation is reflected in West St. George.

At the southern end, a commercial center, in the middle, the emergence of middle income communities on the outskirts of the city and in the third dimension, is the agricultural and eco-tourism potential of the northern end of the constituency.

“West St. George is today one of the fastest growing constituencies both in numbers and economic development. But while much has been done, more needs to be done. We must not neglect those who need greater assistance, who need the enabling environment to help them to enhance their living circumstances. Let us collectively work together and build on the many achievements that this great party under our courageous leader, Comrade Ralph, has achieved.”

King said he was accepting the baton from Minister of Tourism, Sports and Culture, Cecil “Ces” McKie, who is ending his second five-year term as MP for the district.

He noted that McKie had received the baton from Mike Browne, a former minister of education, who also served two terms as MP for West St. George.

“I thank them both for their role in the development of West St. George. It is now my turn to work with the government and people to take our beloved West St. George to the next level,” he said.

‘a sneak peek of our thinking’

The candidate said he had limited time at Wednesday’s rally to present the details of the party’s plan for West St. George.

“But rest assured that there will be other opportunities to do so in the near future,” he said, adding that he felt compelled to give you “a sneak peek of our thinking”.

He said the construction of the acute referral hospital in Arnos Vale, the Belair Spa Project, and the coming construction of the Dorsetshire Hill Playing Field are all priority areas for the next term, along with the orderly and fair relocation of the residents of Pole Yard and the delivery of letters of offers to the residents of Upper Queen’s Drive, “so that they can finally own the lands that they and their families presently occupy”.

King said he was giving his commitment to the people of West St. George “that I will work with you to continue the progressive transformation that we have been witnessing in West St. George.

“I will serve you with honesty and dedication and will give of my best at all times. Curtis King is ready to serve, that is why I stand before you, humbly requesting that when the elections are called, you go to the polls and do the right thing, vote Curtis King.”

General elections are constitutionally due by March 2021, but Prime Minister Ralph Gonsalves has said that Vincentians will elect a new government by the end of 2020.