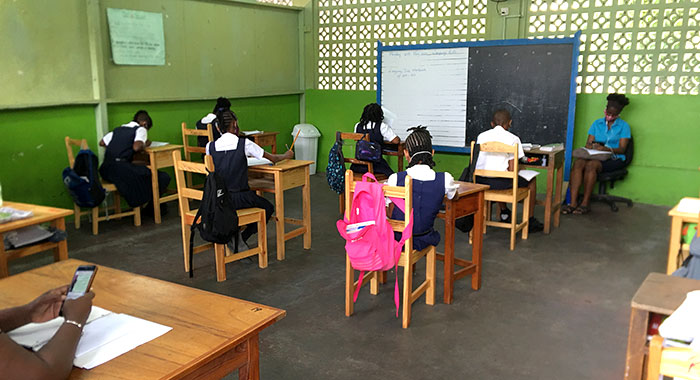 As students prepare to return to the classroom on Monday — most of them for the first time since March, as a result of the COVID-19 pandemic — the St. Vincent and the Grenadines Teachers’ Union says physical distancing is impossible in most of the nation’s schools.

Union president Oswald Robinson told a press conference last week that the government held two consultations with stakeholders in education before deciding that students will return to the classroom on Aug. 31.

“And I made a point that when it comes to implementation, sometimes the policymakers do their own thing,” Robinson said.

“There was only one recommendation from the consultation that was done by the Education Advisory Board for school to return as normal, to normalise the reopening of school, all the other stakeholders, parents, teachers, students, principals, vendors, janitors, and those schools that had security guards or night watchman, all those persons, including the teachers’ union, we said there must be an alternative.”

This means keep a distance of at least one metre, or three feet, from each other and avoid spending time in crowded places or in groups.

Robinson said that the government has set up a national committee to come up with guidelines for social interaction in the context of COVID-19.

“And one of the guidelines is that for indoor gatherings, which we consider mass gatherings, is [a maximum] 200 [persons],” Robinson said.

“And there are certain requirements which must be put in place, schools are already beyond that. Schools are mass gathering. There are some schools, say for example, those schools within the city area are the largest. Let’s say Prep School or CWP — 700, 900 students.

“And the survey would have shown that, for example, one of those — I’m not gonna call name now — one of those schools may have a carrying capacity of say, less than 200 if you’re going to observe the three to six feet.”

Robinson said that taking the situation at these two schools into consideration, immediately, the authorities have failed the people who made the recommendation.

“And I’m saying to the parents, in the Education Act, number 34 of 2006, the parents have an authority there to say to the Minister of Education, ‘Listen to us.’”

He said that parents, who attended the consultations as well as those who participated online, said they want their students to go back to school, but they acknowledge and recommend that it should be a blended approach.

Robinson said it cannot be a one-size-fits-all approach.

“Each school would have to work out what could work, what people are comfortable with. Because we noted there were teachers that were overworked when Grade 6 was going back school,’ Robinson said, referring to a period in June and July when students from those levels returned to the classroom.

“You have one teacher teaching for five, six classes, and sometimes more than one subject area. A lot of people don’t pay attention to the work that teachers have to do and don’t understand that this is part of the new norm. How do we adjust to the new norm in terms of working conditions of teacher?” Robinson said.

“This is something affecting the working conditions of teachers. Our teachers are not robots. They’re human beings. We applaud them and encourage them to do their best, which the majority of our teachers are doing. But at the end of the day, we can’t push them.

“We have to look out for the welfare, the health, the safety of our teachers. So the authorities would have made a drastic paradigm shift when they said everybody going back to school as normal.”

Robinson said that his union never wanted all students to return to the classroom at the same time.

“… there’s a big challenge in managing the mass gathering. It must be some kind of — we prefer not to use the word ‘shift’, the understanding of shift is some go in the morning, some go in the afternoon. That is going to pose other challenges: security of students, parents who have to work, who is going to supervise their children when they are at work.

“… So we were suggesting that you could have like a number of students going to school, like one or two days, and if we have the reliability of the internet and devices, some teachers would have been teaching those at home and those at home would come to school, one or two other days; that sort of thing. But the authorities, the policymakers made a decision that everybody should go back,” Robinson said.