No changes to SVG’s constituency boundaries 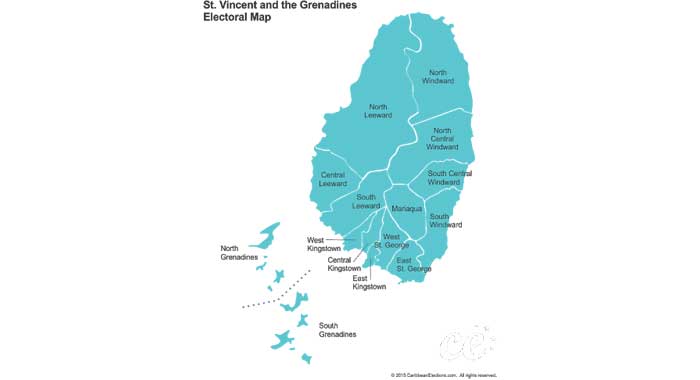 The SVG electoral map, with the Grenadines positioned for visual convenience rather than geographic accuracy. (Image: Caribbean Elections).

There will be no changes to the boundaries of the 15 constituencies in St. Vincent and the Grenadines for the upcoming general elections.

He said on NBC Radio this past week that the Constituency Boundaries Commission had reported one week earlier to Governor General Susan Dougan, who sent a copy to him.

“I imagine that the Leader of the Opposition also received one. The news from the constituency boundaries commission is not particularly eventful in the sense that they didn’t recommend any changes to the boundaries,” the prime minister said.

“So that makes life easier for the — and this was a unanimous report,” he further noted.

The commission was chaired by former permanent secretary Godfred Pompey, who the governor general chose in her own deliberate judgment.

The prime minister said the former top official in the Ministry of National Security is “an excellent public servant”.

The prime minister’s nominee was lawyer Stephen Williams, while Etson Cummings, a retired lecturer in law at the community college, was the nominee of Opposition Leader Godwin Friday.

“But the report was signed by all three of them; it was unanimous. And that’s important from the standpoint of not having difficulties with the Electoral Office to be changing the boundary. So it makes life, administratively, easier for them,” Gonsalves said.

“Again, don’t have any worry that we’re going to have a free and fair election reflecting the will of the people of St. Vincent and the Grenadines.”

General elections are constitutionally due by March 2021 but Gonsalves has said that Vincentians will go to the polls by the end of the year.