‘I do not discuss religion with politics,’ says preacher who’s a politician 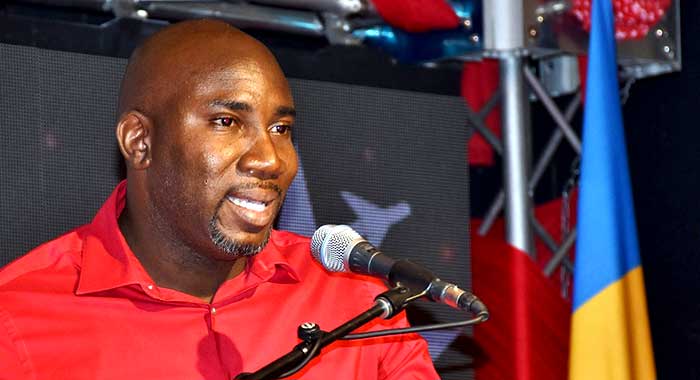 Orando Brewster, a preacher, politician and physician, says he do not “discuss the issue of religion and politics”. (Photo: Lance Neverson/Facebook)

A preacher who says he approached “with prayer, with fasting and a lot of prayerful consideration” his decision to enter politics also says he does not “discuss the issue of religion and politics”.

Orando Brewster, the ruling Unity Labour Party’s (ULP) candidate for Central Leeward, told iWitness News this week that  he does not agree with the view that  politics and religion is a “dangerous combination” — an iWitness News formulation.

“No. There are great men in the Bible such as Joseph and David who were leaders in their country and once you are in leadership, it’s politics on a whole,” said Brewster, a Pentecostal preacher.

“If these great men can go into politics, that is the myth that Christians are not supposed to participate in it. I don’t think that is a good saying that Christians should not.”

Asked if he thought, based on his observation, that religious people, based on their religiosity, have made any difference in their approach to politics or politics in SVG.

“I would be honest. I don’t discuss the issue of religion and politics. I have made my stance going forward on it and it is something I don’t get into discussing religion in the political framework.”

But iWitness news noted that he had just moments earlier said his decision to enter politics was taken after prayerful consideration.

“And that’s why I say I have already taken a stance on by behalf, but when it comes, generally, I do not discuss religion with politics. That’s my stance. I give you from my personal perspective.”

Brewster agreed that his religion influenced a lot his outlook and approach to life and politics.

iWitness news, therefore, asked his view on the ULP approach to the three teachers who, in 2010, contested the election on behalf of the opposition New Democratic Party (NDP) and the ULP administration did not give them back their jobs, notwithstanding a collective bargaining agreement signed between the government and the Teachers’ Union.

iWitness News further noted that the government is yet to obey the court and pay Kenroy Johnson, one of the three teachers, who has reached retirement age, his benefits.

“Well, I cannot comment on that because I don’t have the specifics because I cannot say whether they were ULP teachers or NDP teachers. So I would tend not to make a comment on something that I am not fully informed about. So until then I can’t give you any feedback on that.”

iWitness News, however, noted that the issue is one that is in the public sphere.

“It occurred in 2010. Three former teachers resigned their job and contested the election on behalf of the New Democratic Party. These are all facts — verifiable facts.  The Teachers’ Union went to court after the government decided not to give them back their job. The court ruled that the teachers had a legitimate expectation to get their jobs back. They court further ruled that they are entitled to their pension and all their other benefits when they get to that age. Mr. Kenroy Johnson, who has reached retirement age, has not so been compensated, as per the court ruling. All of these are facts in the public domain,” iWitness News told Brewster.

Brewster, however, said that in 2010 he was not in the country.

Kenton Chance, who conducted the interview, pointed out to Brewster that he, too, was not in the country at the time of the development in 2010.

iWitness News also asked Brewster  about the acquisition of Marcus De Freitas property and the fact that he was not being paid until now — 14 years later — and whether he thought that was reasonable, fair or just.

“These are issues that I am not fully informed about. You can’t throw these things at me and expect me to comment on it.

Brewster recently completed a Doctor of Medicine degree and has opted to go into politics without completing his internship.

He had previously suggested that God led him to medicine and is now suggesting that God is leading him to politics even before he completes his medical training.

“No. I have to finish the internship programme which I have put on pause for this political aspiration that I have coming up here,” Brewster said when asked if he could practise medicine, based on the training he had received so far.

“I don’t know what the future holds, that’s in God’s hand. I am gonna take my direction from him, as to how to proceed forward. So with prayers and careful consideration I will know what the next chapter holds,” Brewster said.

“I have always been someone who puts God at the forefront in everything I do,” he told iWitness News.

Brewster said he had erroneously said he has a “doctorate of medicine”, having confused his level of training with that of the significantly higher “doctorate”, which is not necessarily related to medicine.

20 replies on “‘I do not discuss religion with politics,’ says preacher who’s a politician”