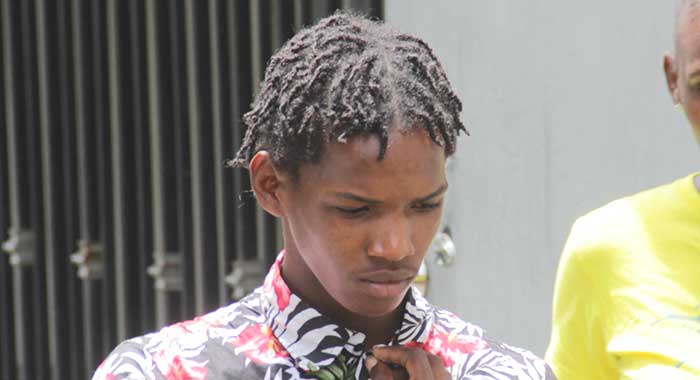 An Ottley Hall youth has learnt the hard way that it’s not a good idea to take something to a prisoner without first examining it, even if it is food.

For his naivety, Jamale Harry, 20, who is expecting to be a father in about three months, was left with a fine of EC$700 to be paid forthwith, if he is to escape a three-month jail term.

The court heard that about 11:45 a.m. Thursday, Harry went to HMP, where he met Prison officer Bertram Malcolm at the entrance gate.

Malcolm’s duties include routine checks of persons entering the prison and their possessions.

Harry was carrying a plastic bag and told Malcolm that he had brought food for Kyle Providence, an inmate.

Malcolm asked Harry to open the container and sample the food — chow mein — which Harry did.

Malcolm examined the food closer by stirring it. While doing so, Malcolm found the three plastic bags in the food.

Harry denied knowledge of their presence in the food.

The matter was reported to the Superintendent of Police, who informed the police.

In mitigation, Harry told the court someone had asked him to take the food to the prison and while he had agreed to do so, he did not know that the prohibited items were inside.

He told the court that he did not want to go to prison because he has a child on the way.

Some of what the defendant said was not audible in the gallery of the court as he spoke somewhat softly.

Chief Magistrate Rechanne Browne noted that recently it seems that many defendants are excepting babies.
She asked Harry how far along was the unborn child and he said six months.

In handing down her sentence, the chief magistrate said that the offence is a very serious, as reflected by the legislation.

She said that Parliament had set a maximum sentence of six months in prison and a fine of EC$1,500 for inducing anything into the prisons.

She, however, began with a non-custodial sentence.

Browne said that the aggravating features were that the offence was a breach of national security and the security of the prisons.

Mitigating features included Harry’s age and his expression of some level of remorse.

The chief magistrate noted that the defendant had pleaded guilty at the first opportunity and appeared to be unaware of what was taking place.
She said that his naivety and youth were factors that had been preyed upon.

Browne cautioned the youth that he cannot be so silly or naive to allow his youth to be pounced upon.

She said that for this he would pay a price — and handed down the fine.