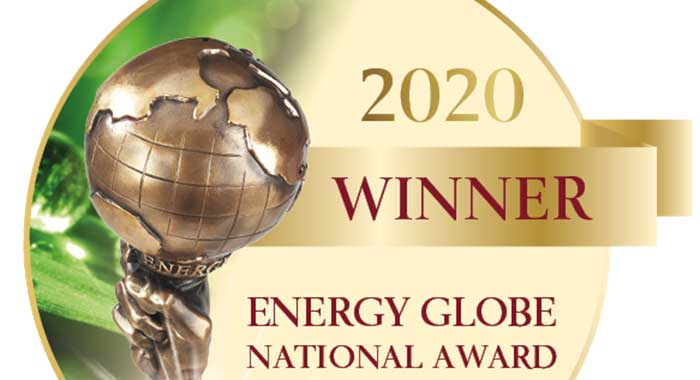 A 10-year project aimed at bringing people together “to identify and undertake concrete climate change adaptation projects” has won the Richmond Vale Academy (RVA) an Energy Globe Award, its third since 2016.

The Energy Compliance Project won by the institution was executed under the RVA’s St. Vincent Climate Compliance Conference, 2012 – 2021.

In announcing the RVA’s success, Maneka Ghandi from India, Chairwoman of the Energy Globe Jury, said:

“This year more than 2,500 projects aimed at protecting our environment have been submitted by more than 180 countries to the Energy Globe Award, which is the most significant environmental award worldwide.

“Both the quality as well as the diversity of the submitted projects is overwhelming.

Our jury of experts is enthusiastic. However, it was a very difficult task to choose the best from the best.

“That is why we are proud and happy to inform you that your project has been selected as the national winner. Our most cordial congratulations on this national Energy Globe Award!”

The St. Vincent Climate Compliance Conference is being conducting taking into account the St. Vincent and the Grenadines’ vulnerability to all major types of natural hazards.

These hazards include floods, hurricanes, earthquakes and volcanic eruptions.

The overall objective of the energy compliance project is to be 90% self-sustainable in the production and use of renewable energy by 2021.

Richmond Vale Academy consists of three buildings on a property of 30 acres of land.

The academy installed an off-grid photovoltaic system consisting of 72 photovoltaic panels producing a total of 18 kWh that can be stored in 120 batteries with a total capacity of 156 kWh.

To be able to fully charge the batteries for longer, the energy system was upgraded to 48 more solar panels producing another 13 kWh.

The academy operates an off-grid photovoltaic solar system in order to be self-sufficient at all times and to remain operational in the event of a central system electricity failure due to climate change-related or other disasters.

The system can produce 70 kWh of energy and about 60 kWh per day are used on lighting, pumping water and to keep food refrigerated.

RVA’s kitchen and most of the bathrooms have hot water sourced from solar energy.

Room temperature water flows from the water tank to the solar collector where it is heated and then returned to the hot water tank.

Hot water can then be drawn on demand from the tank to the showers and sinks in the kitchen.

“This project and the resulting award show what can be achieved when we approach climate change response with a long-term objective in mind. It is hoped that the success of the Richmond Vale Academy in the execution of this project and the prestige associated with the award will inspire other organisations and entities, locally, regionally and around the world to explore ways of reducing their impact on the natural environment.”

Herberg expressed appreciation to the entities and individuals who assisted in the execution and upkeep of the project.