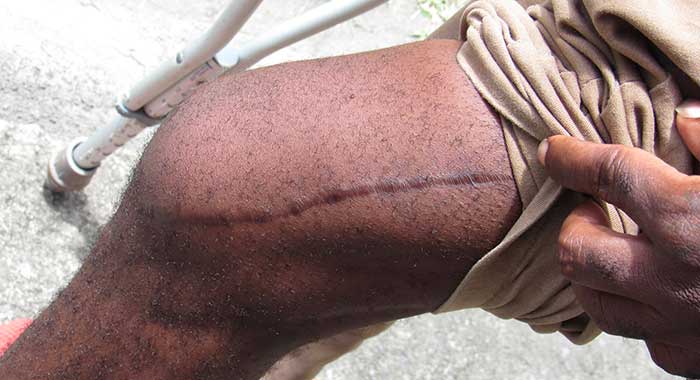 Teron “Frenchman” Baptiste shows the scar from the surgery to his leg. (iWN photo)

A 34-year-old Sandy Bay man was awarded EC$10,000 in compensation for injuries he sustained on his birthday.

Teron “Frenchman” Baptiste, a steel bender, spent a week at the Milton Cato Memorial Hospital, where he underwent surgery as result of injuries inflicted by fellow villager Norman “Yabba” Johnson.

The grievous bodily harm charge from the May 1 incident at Margin Bay, a beach in Sandy Bay, came up for hearing at the Georgetown Magistrate’s Court on Sept. 7,.

Baptiste told the court that his leg still hurts and he will soon start therapy.

The complainant, who used crutches as he arrived at the courtroom, accepted the court’s offer to sit during his testimony.

He told the court he was in the company of two friends on their way to the beach to celebrate his birthday, when he saw Johnson sitting on a stone with his head bowed and his hair hiding his face.

He said Johnson charged at him with a cutlass and said, “I’m going to cut off your f***ing head.”

Baptiste said he was frightened, “like stunted and couldn’t move” as the defendant struck him on the left side of the neck with the cutlass.

He said Johnson charged at him again and it was at this point he started to run but fell on a heap of stones and injured his left foot.

He said he heard Desron May, who was supposed to be the chef at the birthday celebration and who had arrived at the beach before him, told the defendant, “Leave the man alone.”

Baptiste said the men threw stones at Johnson, who ran.

He said he does not know what happened after that.

“I didn’t interfere anyway with Johnson” Baptiste told the court.

In his defence, Johnson said that as he sat on a stone on the beach, Baptiste and his two companions approached him and said, “The war nah over”.

Johnson said the men began throwing stones at him causing him to run to his home a short distance away.

Questioned further by prosecutor Sergeant Renwick Cato about the “war”, Johnson referred to an incident in 2008 where he alleged “they threw rum and coke in me face and buss way me eye”.

But the evidence of Johnson’s common law wife, Mathilda Baptiste was so contradictory to his statements that Pompey referred to her as a “witness of convenience”.

The magistrate said Mathilda lied, saying she saw two men chasing after Johnson, but changed her story to three men when the prosecutor cross examined her.

Desron May and the investigator Corporal 130 May also testified.

Johnson must pay Baptiste EC$10,000 in four months — “a reasonable time to pay”, a magistrate concluded, or serve 12 months imprisonment.