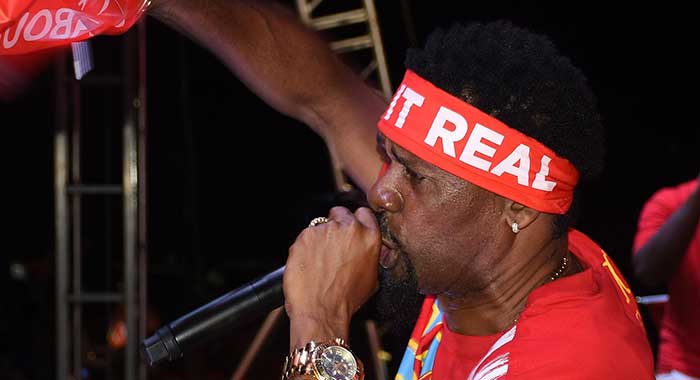 Cultural Ambassafor Rondy “Luta” McIntosh, seen her performing at a ULP rally last year, says he will offer the final video to the party for sale. (Photo: Lance Neverson/Facebook)

Cultural ambassador and soca artiste Rondy “Luta” McIntosh says the postponement of a burial at the Kingstown cemetery on Saturday had nothing to do with his use of the freshly-dug grave to film a video for a political song.

McIntosh, the 2019 Road March winner in St. Vincent and the Grenadines, has been criticised in some circles for his actions.

He, however, maintained that he had permission to use the grave for the video, even as he admitted that he never mentioned the activity to the family of the deceased.

He said his team “understood from somebody there” that the family had rejected the gravesite and a new site had been requested.

McIntosh, however, said that while filming on Saturday, he was not aware of a second grave having been dug at the cemetery — as he said the family had requested.

He also said that he had not erected the tent near the grave where he filmed his video. The grave also had a lowering device installed.

On Facebook, on Saturday, one Don-Tequila Ross, posted several photos of the grave – after the filming — saying, “My Grandmother will NOT be buried in that disrespected grave-hole”.

Speaking on Hot 97, on Monday, McIntosh said he was “one hundred per cent” certain that the family was not going to use the grave, even though they only found out after arriving for the burial, that the grave had not been dug in the location the family had requested, as he claimed.

Shortly after 1 p.m. Saturday, news began to spread that McIntosh and his team were at the cemetery dressed in military-style outfits, and carrying a yellow coffin.

McIntosh is an activist on behalf of the ruling Unity Labour Party and yellow is the colour of the main opposition New Democratic Party.

Persons speculated that McIntosh was filming something for an election campaign song, which he later confirmed.

Then, around 5 p.m., it emerged that the burial had been postponed, apparently because of the condition in which the grave was left after the filming.

However, McIntosh said that the family never had any intention to use that grave.

He maintained that this was the case although the funeral procession arrived at the cemetery after a church service and that was the only unused grave dug at the cemetery that day.

McIntosh admitted that some of the deceased person’s relatives said that they would have considered burying the person in the grave, had it not been for the condition in which it was left after his filming.

In his call to Hot 97, McIntosh said that the video was part of a project that he is working on.

He said that all the dancers, choreographers, artistic director, videographer, and other personnel were involved because of him.

“So I take full responsibility, accountability for every last thing that happened. So let us get that out of the way.”

McIntosh said that he is working on a project as an artiste and someone who practices the cultural arts.

He said that on Friday, he went to the Kingstown cemetery and sought permission to do “a little skit” in the burial ground.

He said that a gravedigger was there.

“I spoke to him, I spoke to people responsible and I went to a site where a grave was half dug.”

He said that on Friday it was just he, the photographer and one other person “so it didn’t create any big set of excitement.

“We went with a camera, he did his thing and then we left with the intention now that we would come back on Saturday and on that Saturday I was coming back with my full team, the full entourage, the dancers and everybody.”

McIntosh said that the hole — the ” half dug” grave that he met at the cemetery was not dug at his request.

“It was dug initially for someone to be buried in…”

McIntosh said that on Saturday, he and his team went to the site where the hole was and “performed our little skit and what’s not with a coffin and the dancers and what’s not. That is what took place, in a nutshell.”

McIntosh said he “got permission … from the people responsible for the burial ground,” but declined to identify who these persons were, saying he was trying to protect others from the ‘cussing’ he said he had received as a result of his activity at the cemetery.

“Let us just say that I got permission. I have nothing to lie about.”

Luke Boyea, the host of the show, noted to the cultural ambassador that the law says that burial sites cannot be used in that way.

Luta said he thinks that was section 121 of the Criminal Code.

“But when they’re quoting laws, they must learn to read and understand as well. Because the first sentence, the first line, I think, in that Criminal Code states that trespassing in a sacred place or burial ground, or whatsoever.

“You can’t trespass when you get permission.”

Regarding the point about getting permission from the family and that the grave was for the burial of a particular person, McIntosh said:

McIntosh said that he knows the family of the deceased and they know him well.

He said the family had made the necessary request for a burial site and a hole was dug to the top of the burial ground.

“The person that is closest to the woman that died, this person was a caretaker, this person has a condition that does not allow her to reach up to the top of the burial ground,” said McIntosh, who later confirmed that the person uses a wheelchair.

“When they realised where the hole was being dug, they made a request and she sent her daughter to say, ‘Well, my mom cannot go there because of X, Y, Z. My mom wants a spot where a vehicle could drive right by the road and my mom could sit right by the vehicle and observe the funeral.’”

He said that with this development involving the family, the grave that he used did not “belong to anyone”.

McIntosh said when the family got to the cemetery, the hole that was promised close to the road was not dug.

He said there was a “little passa-passa” with some family members saying that they should use the grave which had been dug in a location otherwise than they had requested.

Boyea said a family member had told them on Monday that they did not know until they got to the cemetery for the burial, that the grave had not been dug in the location requested.

McIntosh, however, said it was “one hundred per cent” certain that the family was not going to use the grave that had actually been dug.

Some members of the family were, reportedly, willing to use the grave, but it was said to have been left in such a state that they were unable to use it, reportedly because of broken crosses, yellow ribbon, half the earth had fallen back into the grave.

“What I can say, when we finished doing our thing, there were no broken crosses,” McIntosh said, adding that his paraphernalia was made of cardboard and “everything was taken away”.

“What happened though, … there some yellow hibiscus flowers, one or two were left around the area and someone was responsible for cleaning it and like they did not go and pick up those one or two flowers and one or two little grass. That I can attest to.

“It is fair to say that that site was not going to be used based on the person who I explained to you, the person closest to the mother with the condition, she wanted to be a part of the funeral and she said that her mother is not going to be buried up there because a vehicle cannot go there and she must be there to witness her mother go into the grave.

It was noted that a lowering device and tent were installed at the graveside.

McIntosh said that the apparently, the funeral home, “did not do what they had to do so they tried to force them to use that site and the lady said, ‘No, we are not using that site.’

“So whether I went there on Saturday or not, the woman was not going to be buried there. From the daughter, the daughter said, ‘My mother is not going to buried there’ and she said, ‘Luta this has nothing to do with no video or anything like that and wha’ you all do in the burial ground. I stated categorically clear that a new site be given and my mother be buried where I can be part of the funeral.’ These are the facts.”

McIntosh acknowledged that a relative of the deceased woman had made a post about not burying her in the “disrespected” grave.

“I mean to say there was a little confusion that went on during the whole Facebook banter and people start cussing, I guess some people got emotional — a family member made a post stating that his grandmother will not be buried in that disrespected grave and then he pulled down that post when people started spreading and carrying on, he pulled down the post and said he was misinterpreted, his post was misconstrued, that was not his grandmother’s grave.’ A family member said that on Facebook but they run with the first one and not the latter.”

4 replies on “Cultural ambassador in melee over cemetery video”