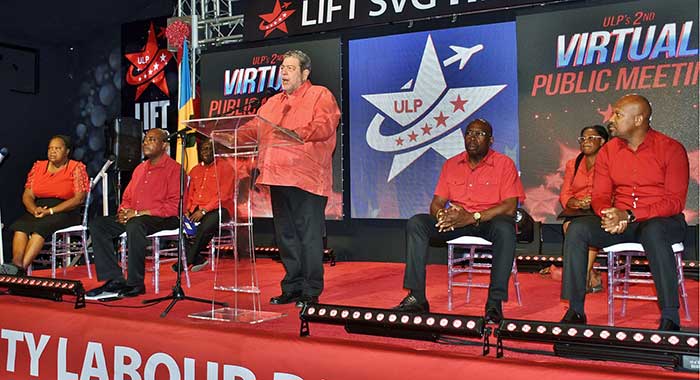 Gonsalves, 74, is leading the Unity Labour Party in its bid for a fifth term in office, although he said the 2015 election would have been his last at the helm.

“If you’re saying that you have any challenge now, in government, try opposition,” he told party supporters in an address at the ULP’s virtual meeting Thursday night, urging them to forget their dissatisfaction with the party until after election.

“… if you don’t do this thing properly, Labour a family. The comrade ain’t going to be in that office, you know. So that when you have a problem, you ain’t gonna be able to call me there to solve it, you know. You ain’t gonna be able to do something which you can do — the only Prime Minister in the entire world that you could turn up any hour of any day without appointment and say you want to see the comrade,” Gonsalves said.

He said that if opposition leader Godwin Friday becomes prime minister, “he got the man them from Mainland China and from Switzerland, who buying the passport them.

“And you have to pass through accountants and those who doing financial dealings and in between the people who he ‘fraid up ah Spring in Bequia. You hear me?

“And because he wants to drive with a learner’s permit he got to have Mitchell there, he to have Leacock there, he goh get Cummings there, he goh got Kay Bacchus. You think Bacchus choreographing them to dance for sport? You hear me?”

Sir James Mitchell is an agronomist and retired politician who led the main opposition New Democratic Party and was prime minister of St. Vincent and the Grenadines for 17 years.

Daniel Cummings, MP for West Kingstown, is an engineer and former general manager of the Central Water and Sewerage Authority, the state-owned water supply and garbage-disposal company.

Kay Bacchus-Baptiste, a first-time candidate for the NDP is an accomplished lawyer and human rights activist.

I just want to tell you what will happen. And then you will have some people who just want to go on the gravy train. When I send you down by Lotto to help with thing for your children, is [sports administrator] Keith Joseph down there you know. You hear me?”

Some persons have criticised the ULP administration for turning the National Lotteries Authority into another social welfare agency, at the expense of its primary function of supporting sports and culture, including through the building and upkeep of sport facilities across the country.

“And when I call up VINLEC now, is [businessman and radio station owner and manager] Dougie De Freitas you going get you know.

“And those of you who know Susan Dougan from country and from Calliaqua and all about, they intend to move she as Governor General and put retired priest. I want the Labour family; I want you to hear you know. I’m giving you chapter and verse.”

Gonsalves said he was taking his time in advising party supporters to register to vote, adding that Bacchus-Baptiste, as well as the NDP’s candidate for Central Kingstown, have no right to observe the registration process.