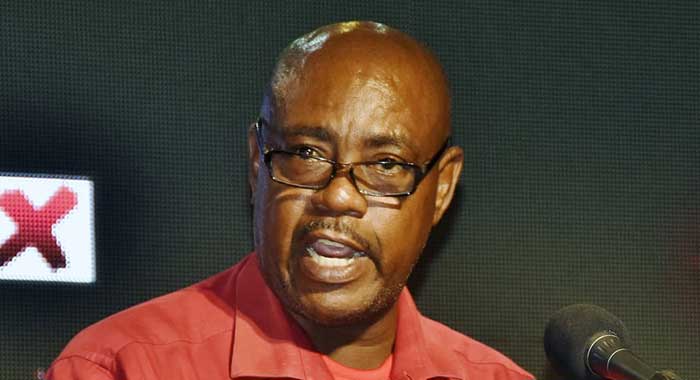 The Unity Labour Party government will increase the amount of money its pays out in Public Assistance to social welfare recipients monthly, commonly called “Poor Relief”.

“Once the Unity Labour Party government is returned to office for another five years, the public assistance benefit to our poor and indigent in St. Vincent and the Grenadines, those figures would be increased,” Minister of National Mobilisation, Frederick Stephenson told the ULP’s virtual public meeting on Wednesday.

“A few days ago, I heard on the NDP platform that they want to take St. Vincent back to the golden days. The golden days would mean that taking public assistance back to $60 — under NDP (New Democratic Party),” he said.

Stephenson said there are 4,300 persons on the public assistance programme and every month, this government spends $2.315 million to meet the needs of the poor and vulnerable in St. Vincent and the Grenadines.

The 2007-2008 poverty assessment report, compiled by the same consultants who did the assessment 10 years earlier, showed that the poverty headcount was reduced to 30.2% and indigents to 2.9%.

“How did the ULP government achieve these reductions? We set about targeted programmes for expansion in the economy, for the export of goods and services,” Stephenson said.

“We created an environment where persons in the country can use their talents and their skills; we strengthen the social safety net programmes within the Ministry of National mobilisation. We improved in ICT, in housing, in education, in adult education, literacy and training among several other initiatives,” he said.

And this year, the government has spent over EC$850,000 in uniform assistance and back to school assistance, the minister said.

Since then, every year, over 500 persons enrol in the programme and receive a stipends of between EC$500 and EC$850 a month, for one year.

“YES Programme has seen young persons moving into the public and private sector, to nursing, to teaching, and to other areas in the government service…”

This programme is funded by Taiwan, and Stephenson noted that the NDP has said that it will cut ties with Taiwan in favour of China.

“Comrades and friends what would happen to our young people if in St. Vincent and Grenadines we make a mistake to vote for the NDP? What would become of the YES Programme? That would fall by the wayside. I’m saying to our young people, listen, and be warned,” Stephenson said.

He further noted the Home Health for the Elderly, saying it is another of the important flagship programmes of the ULP government.

The minister further pointed out that the government has built improved temporary accommodation at the Louis Punnett Home at the former Nurses Hostel at Stony Ground.

“You see, this is a caring government. And we have to know it is stated that one of the hallmarks of a good government is how it takes care of the children, persons with disabilities, the young people and the elderly,” Stephenson said.

“The Ministry of National Mobilisation also provides assistance for funeral and medical expenses. We provide assistance for school fees and exam fees for the poorer children in our schools.”

He said there are programmes for transport subsidies, disaster relief, and assistance to fire victims.