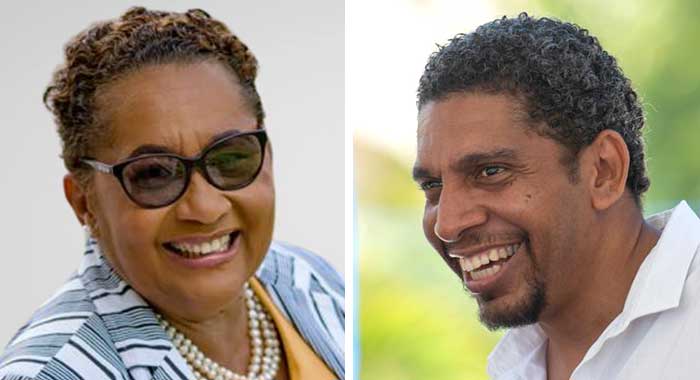 “The people of East St. George have been neglected by the ULP (Unity Labour Party). That is not the sign of true leadership. This is compounded by the fact that the Minister of Finance, your soon to be former representative, lives in East St. George and allowed the constituency to deteriorate. Camillo, I want your vote too! You really don’t want to be on the wrong side of history!”

Gibson-Velox was speaking on Sept. 17 at the NDP’s virtual public meeting, addressing the topic of keeping constituents safe.

“The NDP will work to ensure that each and every person in SVG feels safe and secure. We will protect homes from the climatic conditions our islands face,” Gibson-Velox said.

She said that in East St. George, an NDP administration will introduce several measures, including improving the drainage system and river defences in Calliaqua, which she said have been left unattended.

“The NDP will address the high levels of crime that have left so many people worried and concerned about personal safety and protection of property.

“We have a plan that will reassure residents of their safety so they do not feel vulnerable whenever they engage in social activity away from home. No need to rush home and lock yourselves away like prisoners in the place you’re supposed to feel most relaxed. We’re fixing that too!” Gibson-Velox said.

She said that an NDP administration will refurbish the Calliaqua Police Station and residential quarters to ensure police officers have the best possible facilities to make sure that constituents are safe.

“After 20 years in power, Ralph (Prime Minister Ralph Gonsalves) and the ULP have grown complacent, leaving the people of East St. George and the rest of SVG to fend for themselves,” he said.

Gibson-Velox, a first time candidate, is trying to prevent Camillo from securing a second five-year term, having garnered the most votes of any candidate in 2015, his first outing at the polls, when he amassed 3,135 votes, winning his seat by 607 ballots.

One reply on “NDP’s E. St. George candidate asks MP for his vote”