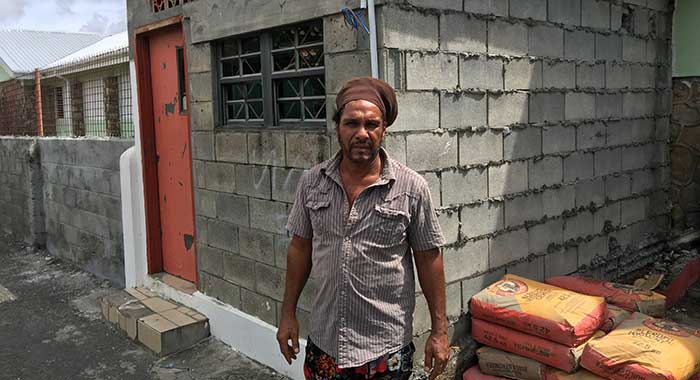 Joffre Christopher outside the shop at the Kingstown Government School on Tuesday. (iWN photo)

The operators of the shop adjoining the Kingstown Government School has denied that it was spared demolition, even as the other two were broken down, because of their politics.

Member of Parliament for West Kingstown, Daniel Cummings said recently that the shop is creating a ventilation problem at the school, located at Stony Ground.

He said that while the two other shops there were demolished, one was left standing because the owners are supporters of the ruling Unity Labour Party.

Cummings, who is seeking a third five-year term as MP for West Kingstown, said he would personally demolish the shop if the New Democratic Party is elected to office in the next general elections.

However, Joffre Christopher and his girlfriend, Kayshara Young, who run the shop, spoke to iWitness News on Tuesday, and denied that their shop was contributing to the ventilation issue at the school.

The couple said that the government should compensate them for the concrete and zinc structure and provide an alternative location from which they can operate.

Christopher said he contacted Prime Minister Ralph Gonsalves amidst the move by Physical Planning authorities to demolish the building.

He told iWitness News that his mother has been operating a shop in the area since 1975 and since then, various members of the family, including his stepfather and stepson have operated business there.

In 1975, the shop was located on the other side of the road, next to the fence of the Jaycees building.

However, it was relocated to its current location in 1976 after a conflict with a businessman in the area, who complained that the shop was affecting his sales, Christopher said.

He said that after the conflict, police officers pulled off the electricity connection from the shop and his mother complained to Hudson Tannis, who was the area representative.

Christopher told iWitness News that his mother then received permission to build the shop on its current location, which was then part of the parking lot of the then unfenced school.

“The permission was from Cabinet to Town Board to Mr. Rose and that’s a very long time,” Christopher told iWitness News.

He said he operated the shop from 1981 and he was never given a notice to move.

No notice was given even when the most recent and extensive renovation of the school — which was completed this year — was conducted, Christopher said.

“It is surprising because I actually called the prime minister and we talked. He told me to go to Planning,” he told iWitness News of the recent move to demolish the shop.

He said that the Planning officials told him that the structure had been erected illegally and they had posted notice for its demolition.

“I told the man, ‘We are there illegally and we are there 45 years — before this wall was built?’” Christopher told iWitness News, adding that when the perimeter wall was built, the principal at the time was the wife of the commissioner of Police.

He said that the structure could have been demolished then, if it was illegal but the perimeter wall was built to adjoin the school.

Christopher said that Planning authorities have no evidence of having given him notice to vacate the area.

“Timothy Scott came from the Ministry of Education. But these people at Planning, we never see any. They don’t even have a picture [of a notice],” Christopher said, adding that the officials told him that they had placed a demolition notice on the structure last year.

He said that he had heard from someone close to one of the other shop owners that there was a plan to demolish the structures.

Christopher said that the other two shops were not operating when they were demolished.

“It is a nice area to do business. But what we are saying now, you coming to demolish a structure, you have to consult and ask people what do they want. The other two shops were in dilapidated conditions,” he said.

Young said she was operating the shop last year but, because of the dust being generated, could not continue to cook at the shop when the renovations reached the section of the school close to the shop.

“The shop is very important because I have three children to take care of. That is the only source of income,” said the mother of 7-, 5- and 1-year-old children.

Young denied that politics played a role in the shop not being demolished.

“The shop was not broken down because when they came to break down the two other shops, somebody came and called me and told me they were breaking down the shops.

“So I went out there and when I went out, one of the men was on top of my shop roof so I started making noise because no one had given me a notice. I said, ‘Get down!’ And I had things inside the shop. I have things in the shop all now,” Young said.

“She called me too. She did call me off of my job. To break down our shop would have been a harder task because there was like wood structure and crumbling.”

On Tuesday, most of the items that were in the shop when iWitness News first visited last week had already been removed.

Young suggested that the government set precedent for compensating persons who erect illegal structures when it paid EC$4,500 to each vendor who has been operating in the area of the Reclamation Site where a new port is to be built.

“And not only compensate. We’re here 45 years. We should be related too, if they are really serious,”

Christopher suggested that the shop should be relocated to somewhere close by.

“They have the river bank down there. All of that is good too.”

One reply on “Couple wants compensation for shop built onto school”