MP elated at demolition of last shop built onto school 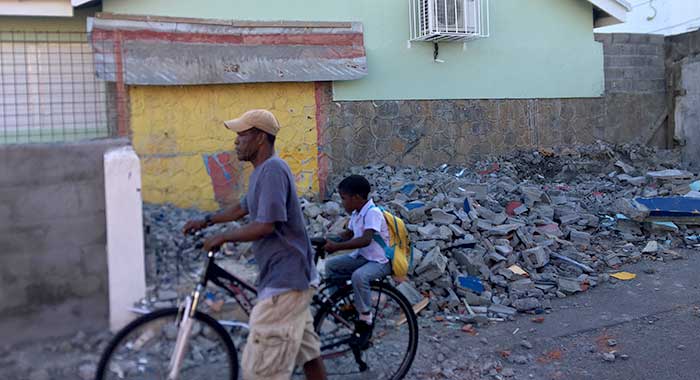 An unidentified man and a student pass in front the rubble of the demolished shop at the Kingstown Government School in Stony Ground last week. (iWN photo)

Incumbent parliamentary representative for West Kingstown, Daniel Cummings last week welcomed the demolition of the last of three shops that were built onto the Kingstown Government School.

“I am so elated that the children of the Stony Ground Government School would finally be able to have the environment they have been yearning for,” he said on the main opposition New Democratic Party’s (NDP) “New Times” programme on NICE Radio.

The shop, which was operated by Joffre Christopher and his girlfriend, Kayshara Young, had remained standing while two others were demolished last month.

Young told iWitness News that they wanted to be compensated for the structure, noting that the owners of less robust vendor structures along the Reclamation Site had received compensation when they were ordered to move.

But Cummings had said that the shop had remained standing because of the operators’ politics but welcomed its demolition last week.

“I am aware that in Stony Ground, at the Kingstown Government School, despite all of the nonsense spouted by the other side, I am very glad to report that Planning has taken the decision to demolish that shop,” Cummings said.

He said that the shops had been a nuisance to teachers and students as well as parents.

Cummings, who is seeking a third term as Member of Parliament for West Kingstown, said that the shops had prevented students “from having a proper playground” and prevented the parent-teachers association from dealing with the issue of security at the school.

“They chose at this point in time, assisted by the police to be in rain now, even as we speak, they are demolishing that last shop and I thank God that common sense has prevailed.

“This has taken this government a very long time,” he said, adding that he had been calling for the removal of the shops since he became a senator — around 15 years ago.

He noted that he had threatened that if his New Democratic Party wins the general elections and it became necessary, he would have personally demolished the shop.

“And I didn’t make that statement lightly; I am so annoyed with the bureaucracy and the party politics that has been allowing this kind of nonsense to go on for so long.

“A country cannot progress when party politics takes precedence over the very wellbeing of the children of this country. These kinds of things, the rest of the world must be looking on and wondering, good heaven why does it have to take this kind of action to find solutions to problems that are so glaring, so obvious, so much needed, for so long.

“But you know, as the owner of the shop said, he spoke with the man who is in charge of this country , who controls every square inch of the country and apparently, you don’t get anything done unless you come back to papa,” Cummings said.

“All these years, these kids have been suffering, sweltering in the heat. If you have ever been in there, you would understand what I am talking about. Horrible. But thank god, finally.”

Cummings suggested that windows that had been blocked out for security reasons because of the shops would now have to be reinstalled.