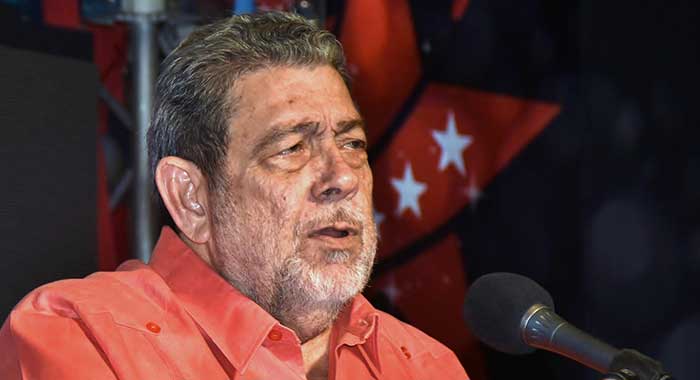 The NDP has said that if elected to office in the Nov. 5 poll, it would reduce VAT from 16 to 13% and would further remove VAT from a number of food items and basic commodities.

The prime minister, whose Unity Labour Party is seeking a fifth consecutive, five-year term in office, said that reducing VAT does not mean that supermarkets will lower the price of commodities.

Gonsalves said that in 2020, the government is estimated to collect $585.7 million in tax revenue.

He said that when incumbent East Kingstown MP, Arnhim Eustace was prime minister, he had announced the NDP’s intention to introduce VAT, a policy that the ULP implemented.

“And we supported it. The reason why we support moving to the VAT is because the economy was increasingly becoming services and 80% is now services — at a higher level than before.

“… so you’re moving away the consumption tax and you put the VAT, roughly is the same percentage, but what you also include now in the VAT is services. … services like medicines and so on are exempt.”

Gonsalves raised questions about how the opposition would make up for the short fall.

“… because this thing about citizenship by investment, selling passport and selling citizenship, is so unstable and so wrong in principle that only a reckless government would so proceed,” Gonsalves said.

“So they will have to increase taxes elsewhere. It might be a foot tax, a mouth tax, a hand tax, an ear tax, and eye tax, they going shift it from one place to the next, where it is less efficient.”

He said that the government already has a lot of tax exemption and a lot of zero-rated items.

“For instance, the first 150 units which you burn for electricity does have VAT on it… The point is this, we are already taking into account the poor because remember, we just zero rate and exempt an additional number because of COVID.”

He said his government had done this to give some ease to the people, even as the national coffers suffered loss of revenue.