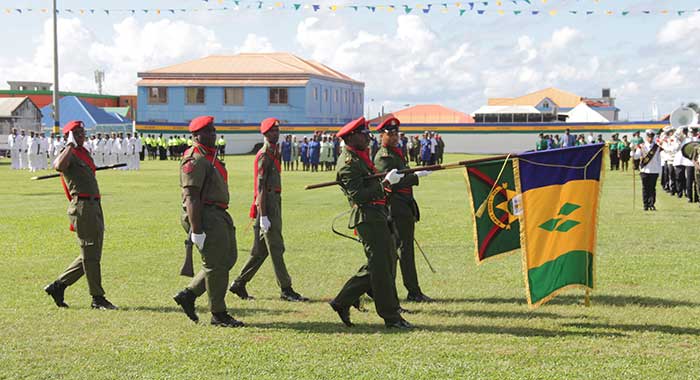 A scene from the 2019 independence parade. (iWN photo)

The parade to mark the 41st anniversary of Independence of St. Vincent and the Grenadines will take place on Tuesday, with spectators “strongly advised” to adhere to COVID-19 protocols.

The military parade, at Victoria Park, Kingstown commenced at 8 a.m and spectators are asked to be seated by 7:40 a.m.

This year’s parade will not include and an “Up Town” salute, the Royal St. Vincent and the Grenadines Police Force (RSVGPF) announced in a press statement on Wednesday.

“Spectators are strongly advised to adhere to the COVID-19 protocols by wearing a facemask. Temperature checks and hand sanitising will be done at the entrances to Victoria Park,” the statement said.

The RSVGPF said that the independence anniversary will be celebrated under the theme, “With Strength, Honour and Dignity, We Stand Resolute at 41 and Beyond”.

Prior to the commencement of the parade, there will be arrival of the dignitaries including the Commissioner of Police, Prime Minister Ralph Gonsalves and Her Excellency, the Governor General, Dame Susan Dougan,

This will be followed by a prayer for the nation, which will be rendered by a member of the SVG Christian Council.

The parade will include a Twenty One Gun Salute to the nation and an address by the prime minister.