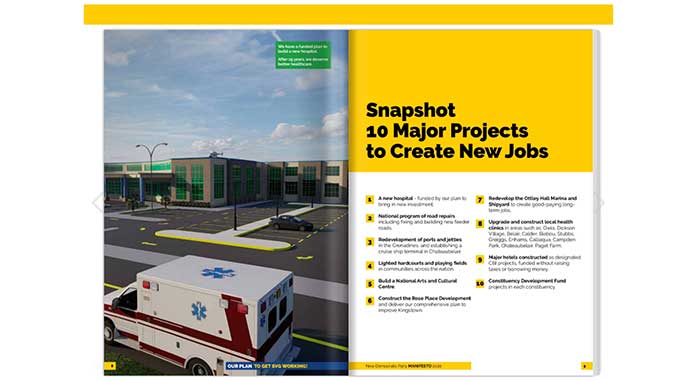 The main opposition New Democratic Party (NDP), on Saturday, launched its manifesto for the 2020 general elections with party leader, Godwin Friday, saying the document outlines “a programme for us to go forward”.

“The Unity Labour Party have had their day, they have let you down over and over again,” Friday, a four-term MP for the Northern Grenadines, who is leading the NDP into a general election for the first time, told party supporters at a rally in Petit Bordel.

“They have made promises  they had no intention to keep and know what they will do; [they] will come and they make all kinds of promises,” Friday said of the Ralph Gonsalves-led ULP, which is seeking an unprecedented fifth five-year term in office.

He said the ULP has said that its manifesto, which was scheduled to be launched one day after the NDP’s, was going to be even longer than the 2015 document.

“Well, everybody knows that Ralph likes to talk long. So that is not surprising,” Friday said of ULP leader, Prime Minster Ralph Gonsalves.

“But the point is, the longer a manifesto is, the more it shows you that they have all these things that they should have done in the last 20 years and they have failed to do.

“It is an indictment on them to say that they have all these things that they have not done for the people of this country. And it will tell you as well, that they will make promises, they will say anything to try and get your vote”

The opposition leader said that the ULP will fail in its efforts to woo electors, saying, “… the people of this country have seen through them.

“Now is the moment that we have a choice to make. It is a once-in-a-generation opportunity for us to move forward into our future. Give my team and me the chance to take this country into the future. We have the vision. And we have the plan. We will create jobs for our people, our young people. They need hope, and we will generate this for them,” Friday said.

The 76-page document, which is also available online, is dubbed “Our Plan to Get SVG Working”, echoes the NDP mantra of “Jobs! Jobs! Jobs!” for Vincentians.

It captures, on page 7, in bullet points, “10 Reasons to Vote NDP”, the first being, “We have a long-term plan to create new, sustainable jobs and reduce unemployment.”

The document says that an NDP administration will “create opportunities so our young people can succeed here, build a home and raise a family”.

The party also restates it plan to reduce VAT, immediately, from 16% to 13% and remove it entirely from essential foods and medicines and review import duties and procedures.

“We have a funded plan to build a new national hospital and fix local clinics across the country to improve healthcare,” the NDP manifesto says.

The NDP also says it has “a plan to make it easier to do business in SVG and to support local businesses so they can grow and hire more local people.

“We have a plan to transform our infrastructure with new roads, ports, and manufacturing facilities. This will unlock our economy and create new jobs.

“We will fund technical and skills education in local areas, reinvigorate and boost the YES programme and reduce interest on student loans by half, down to 4.5%.”

The NDP says it will back the nation’s fisherfolk with new equipment and boats; and farmers with access to land, credit and markets to revive these crucial sectors.

“We have a plan to develop our tourism sector, making SVG a leading destination in the Caribbean while backing local establishments, in addition to international hotels.

“We will bring in new investments to fund our plans for jobs and growth,” the NDP says.

The document begins with a foreword, in which Friday says that the NDP has “a clear plan and the determination to build a better St. Vincent and Grenadines for our future.

“For too long, a lack of economic opportunities has seen many of our people leave for opportunities in Canada, USA, UK and other countries. Many are lost to our islands and never return.”

The opposition leader said that in SVG, cost of living is rising, and it is hard to make ends meet. We need jobs and incomes to look after our families.

“In the NDP, we are passionate about building a country that works for everyone and where everyone who wants to work can.”

He said that the NDP’s plan will create better conditions, which mean Vincentians are happy to stay.

“We will set ambitious targets to deliver the investment, resources and production we need. A strong economy and good infrastructure will bring foreign investment and increased wages for all Vincentians. Without a strong economy, we cannot afford to pay for housing, schools or hospitals.

“We will outline specific, deliverable measures for all these sectors, and we will get St Vincent and the Grenadines working again.”

Friday said that for too long, SVG has neglected its most precious resource — its people.

“It’s time to change that and to ensure more of our young people can build careers and raise their families here in St Vincent and Grenadines. Let’s work together to ensure a brighter future for all of us,” Friday said.

The manifesto was launched at a rally that was preceded by a singing competition among artistes who sang songs in support of the NDP.

Chrissy, an 11-year-old Petit Bordel resident, kept the top prize, EC$1,500 in cash, in her North Leeward village, having wooed the judges with her song, “Love Box”.