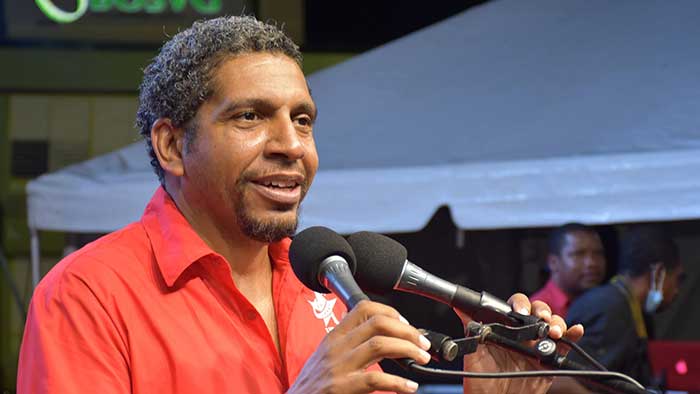 Minister of Finance Camillo Gonsalves, on Sunday, used his speech at the launch of his ruling Unity Labour Party’s (ULP) manifesto for the Nov. 5, general elections to rubbish the main opposition New Democratic Party’s (NDP) document, which was launched one day earlier.

Gonsalves ridiculed the NDP manifesto, noting that it mentioned “Central Windward”, a non-existent constituency, and promised to light a non-existent playing field in Fair Hall.

“I looked in their manifesto for a plan, a policy, a programme, an initiative, anything that would say these people are ready to govern St. Vincent and the Grenadines and I found nothing,” Gonsalves told ULP supporters at a rally in Kingstown.

“Instead, I found them talking about a constituency called ‘Central Windward’,” the incumbent MP for East St. George said.

“Way dah dey? … It seemed like they build a whole new constituency and call it Central Windward.  Well, on Nov. 5, ah want the people ah ‘Central Windward’ to vote for the NDP and I want the rest ah we to vote for Labour,” said Gonsalves, who is seeking a second term in office.

At the beginning of his speech, Gonsalves said he had had “the misfortune” of flipping through the manifesto “to see if after all these years, the New Democratic Party could come up with a plan or a policy or a programme that could benefit the people of St. Vincent and the Grenadines.

“And I’m sorry to tell you that even after all these years in opposition, after four-in-a-row in opposition, they still have a plan to develop St. Vincent and the Grenadines.”

He said he had searched the document to “to see if by some chance they’re ready for governance in St. Vincent and the Grenadines.

“And the answer is no,” told ULP supporters and went on to list some of the things he said are missing from the NDP manifesto.

“I look through their manifesto, to see if they’re brave enough to say that they going and sell us out to China. But they ‘fraid to tell you that so they hide that out the manifesto,” Gonsalves said, referring to the foreign policy shift the NDP announced in 2016, but which it seems to be backing away from without an official announcement.

“I look from the front to the back. I ain’t see the word China in dey although you and I know that they going to sell us out to China and sell out Taiwan, if they get the chance,” Gonsalves said.

He said there was no Promoting Youth Micro Enterprises (PRYME) an initiative introduced by the government this year, which gives up to EC$40,000 to applicants to start or expand a business.

“No word about PRYME; that means PRYME will be cancelled under the New Democratic Party,” Gonsalves said.

The finance minister said the NDP said nothing about the new port in Rose Place.

“They say they ain’t building no port. They go build some apartments down there. So new port if you vote for the New Democratic Party.”

Gonsalves said the NDP manifesto is silent on the Zero Hunger Trust Fund, the Support for Education and Training (SET) programme, scholarships, and early childhood education.

“In fact, the whole section on education is half a page and they done with education.”

He further said that there was no mention of medical schools and the important role they play in the country; disaster management and disaster response; CCTV, and the elderly.

“I want you to know, elderly Vincentians, I read the NDP manifesto front to back and they ain’t say one word about taking care of old people.”

He said the manifesto did not mention Rain Forest Seafood, which is constructing a factory in Calliaqua, the jobs is going to bring to SVG and all the fish is going to sell.

The finance minister further said there was no word about Sandals Resort International, which is supposed to be buying the Buccament Bay Resort.

The resort has been shuttered since 2016 and the government has acquired it and will sell it to the Sandals.

Gonsalves also said the manifesto did not mention Royal Mill, a private sector hotel project in Ratho Mill, or the hotels that the government has borrowed money to build and will be branded and managed by Marriott and Holiday Inn.

“Listen to what they say and what they don’t say,” he said of the NDP.

Gonsalves said that the NDP said it would build a hospital, but did not identify the site or where the money would come from.

“Is a secret; so some secret job from the secret hospital.”

He further said that while the opposition had “cussed” the athletic facility at Diamond, there manifesto did not contain a word about a national stadium.

He said that the NDP has two positions on ganja, with the incumbent MP for North Leeward, Roland “Patel” Matthews, saying that an NDP administration would allow persons to grow five ganja plants, while the manifesto says five plants.

Gonsalves further said that while the NDP has spoken about legalising the possession of up to two ounces of marijuana across the country, the manifesto says,  “In defined areas in North Leeward we will legalise recreational use of marijuana. These will be known as Marijuana Freedom Zones.”

And while the minister stopped there, the manifesto further said, “These zones will encourage tourism and create opportunities for new accommodation, restaurants, bars and related services in North Leeward, all leading to business opportunities and more jobs.”

“So let me how this going wuk. You going drive all through St. Vincent, ganja nah legal, but as soon as you cross down Peto (Petit Bordel) you could smoke ganja. Tha’ is the plan?”

Gonsalves said the NDP manifesto says that the government has done nothing for ICT infrastructure in the country.

However, on the next page, he said, the document said they NDP will take advantage of the new ICT fibre optic backbone in the country.

“I couldn’t believe it,” he said, adding that the NDP had said that one-quarter of households had broadband internet.

“But I checked just today, and 20,000 households in the country have broadband Internet.

“So if only one of the four have that mean they have 80,000 households in St. Vincent. That mean every man and every woman and plenty children have their own homes in this country. Don’t believe the lies of the New Democratic Party,” Gonsalves said.