SVG-Taiwan ties are about principle, not money 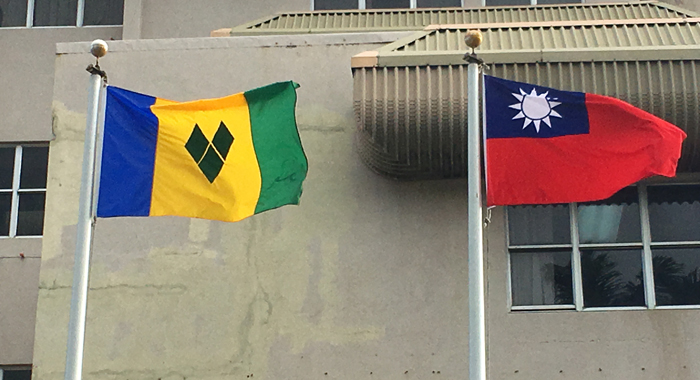 It is indeed a sad tale and almost an embarrassment when learned persons fall prey to hapless self- subterfuge based on intellectual gymnastics that masquerade sinister intent.

But even that opening paragraph read like another political mischief-maker dancing on the head of a pin, equally disguising an aim to persuade unsuspecting readers of a ‘biased’ position.

In this regard, I acknowledge that I am a current beneficiary of a scholarship from the Republic of China on Taiwan and categorically denounce the plans of the opposition New Democratic Party (NDP) to switch ties to mainland China.

However, I justify my position below on a singular basis: PRINCIPLE.

St. Vincent and the Grenadines established diplomatic relations with the Republic of China on Taiwan in 1981, just two years after our political independence. Admittedly, we did so at a time when the world as we know it today was facing different geo-political dynamics. In fact, mainland China was still largely isolated and without much international standing.

It was not until 1992 that the communist regime in that country articulated its ‘One China Policy’ that caused a rethink across many capitals.

Some eleven intervening years spanning the Robert Milton Cato St Vincent Labour Party and the Sir James Mitchell New Democratic Party administrations saw a continuation of this then young relationship up to 1992.

In practice, while China was successfully cherry-picking countries in the OECS and the Caribbean to switch allegiance to Beijing, St. Vincent and the Grenadines had shown greater ‘backbone’; not chasing shadows nor waterfalls.

Alas, in what was described as a shock announcement, former party leader of the New Democratic Party (NDP) told the public:

Think about it ladies and gentlemen: we are making a decision in the interest of the people of St. Vincent and the Grenadines because we believe if we take that step we will get even greater benefits for the people of St. Vincent and the Grenadines. And that is what everybody should want. Our economy is in a poor condition — very, very poor and we believe that we can do better, not only in this area and many other areas and that is why we took the decision. And what I announced there is the position of the New Democratic Party.”

Kudos to Mr. Eustace for thinking albeit not creatively, about opportunities to extract greater benefits for the people of St. Vincent and the Grenadines.

The statement by Mr. Eustace showed that the decision was based solely on self-interest rather than a glorious consideration of how international relations work as some would now try to convince us to believe.

How do we define relationships? At what point does a wife decides to leave her husband or vice versa?

Supporters of the change from Taipei to Beijing say rather unintelligibly that we can get more ‘money’ from Beijing if we switch. Some foolhardily say that we should reassess our relationship with Taiwan but on the premise that the “side gyal” China may offer something “sweeter” than our wife of 39 years.

We cannot be so simplistic or infantile to argue that our principles should be evaluated singularly in dollars and cents. The reality however, in the world of international politics, some foreign policy hawks see relations as one dimensional, that is, in the ‘interest’ of the country.

Those who seek to weaken international relations however fail to calculate that it is strong bonds based on more than just economic relations that have guaranteed relatively lasting peace since World War 2. In times of growing insularity, it behooves every nation to build bridges of friendships which are authentic, mutually beneficial and principled.

If we cheapen the basis of our relationship with Taiwan solely to extract greater financial assistance elsewhere, that will make us no less better than those who had for centuries raped our countries of our resources: FOR THEY TOO ACTED OUT OF ECONOMIC SELF- INTEREST RATHER THAN ON PRINCIPLES.

Instead, any re-evaluation or revision of our relationship should be focused on strengthening our bonds and deepening cross border trade, investment and people to people contact.

Intellectual chauvinism is the dilemma of many who weave a tangled web to deceive.

It therefore seems that many will like us to give up on timeless wisdom to satisfy an ‘eat ah food mentality’ in the opposition camp. But lest we forget, I repeat: “It is easy to abandon principles when it becomes inconvenient or difficult to adhere, but principles only mean something when it’s inconvenient to stand by them.”

4 replies on “SVG-Taiwan ties are about principle, not money”