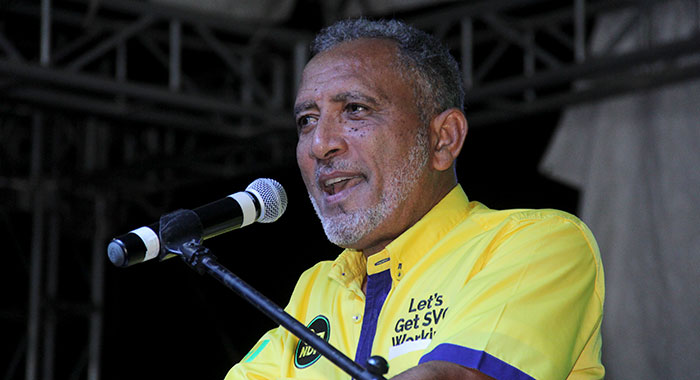 The impact of the COVID 19 pandemic remains a matter of grave concern, president of the main opposition New Democratic Party (NDP), Godwin Friday said in a national address Wednesday night, following his party’s defeat at the polls last Thursday.

“Our economy, already weak and rudderless before the pandemic, has been brought virtually to a halt,” Friday said in the address in which he said that the NDP will “with increased vigour and determination, work to bring about the change we need and that you voted for”.

Friday, who was the opposition spokesperson on tourism in the last Parliament, said that tourism has dried up and the nation’s hotel and restaurant operators struggle against growing odds

He said there are no new capital inflows through investments to spur economic growth and create jobs and there are no credible plans to revive the nation’s farming and fishing industries.

“These are matters that we addressed honestly and constructively during the election campaign and which we will continue to pursue.  They are problems that we intend to address, whether we are in government or not,” he said.

However, the NDP won the majority vote, and Friday said this has resulted in “a crisis in governance” in that the ULP “lacks democratic legitimacy”, echoing sentiments that Gonsalves had expressed in 1998, when the situation was reversed.

“Our opponents, for short term political gain, distorted and misrepresented the policies and programmes we presented and lied about our motives and intentions,” Friday said.

“Through shameful, jingoistic rhetoric and appeal to the basest instinct of our human nature — the usual refuge of populists and autocrats — they sought to mislead our people, while offering nothing constructive and hopeful in return.”

He said that some believed the ULP, but most electors did not.

“And even after all of that, more people voted for the NDP than the ULP. This tells me that there is much work to be done. But more importantly, that there is hope that it can and will be done, though it may now take a little longer,” he said.

The fifth-term Northern Grenadines MP said that overshadowing the situation in the country is “the doubtful legitimacy of the present ULP Government and the impact this will have on governance in the country”.

Friday, a lawyer, said that on the basis of the nation’s shared values, at its core, democracy is expressed through the will of the people shown by a majority of the votes of the people; “the legitimacy of the minority government that the ULP has now become is in doubt.”

He, again, emphasised the 2018 poverty assessment data, which was leaked to the opposition, which gave them to the media ahead of last week’s election.

“Most damning for the government and painful for our people is the widespread incidence of social and economic decay that is seen in the high unemployment rate, especially among our youth, poor health care services and rising crime,” Friday said.

He said this is seen in also “in increasing poverty among our people.

“That poverty was documented in the poverty assessment survey that the government itself commissioned but buried for over two years because they did not like the stark reality of growing poverty exposed by the survey, which only came to light when it was obtained and published by the NDP a few weeks ago.”

“Even worse and more telling is the fact that the poorest of the poor — referred to in the survey as the indigent poor — increased from approximately 2.9% in 2008 to over 11.3% ten years later,” Friday said.

“Poverty is growing in our country! The survey said it but you felt it long before that.”

The prime minister has said that the data leaked to the opposition was incomplete and that when the study is “properly done”, including a peer review, it will show that poverty has decreased across the country.