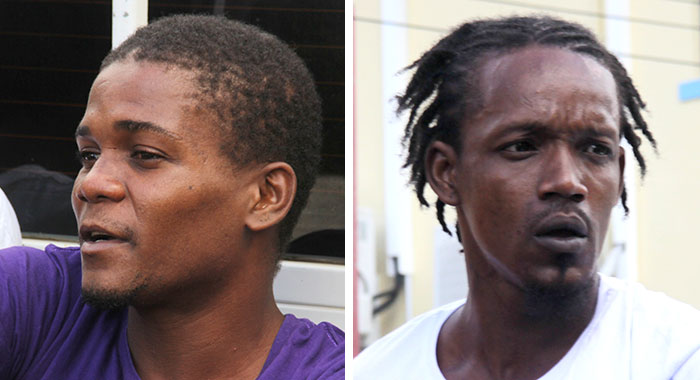 Two men appeared at the Kingstown Magistrate’s Court, on Friday, charged in connection with the burglary of the First St. Vincent Bank, which netted EC$37,000 in cash.

A third man, Jrann Browne, 31, a fisherman of Long Wall, saw the burglary charge against him withdrawn just before his arraignment.

Browne, however, has to answer to a charge of possession of EC$100 in cash, which police are alleging he knew came from criminal conduct.

Prosecutor have charged Jason Williams and Solomon Laborde that between Nov. 14 and 15, at Kingstown, they entered the First St. Vincent Bank and stole EC$37,000 in cash, the property of the bank.

None of the two burglary accused had a lawyer in court.

Williams immediately pleaded not guilty, while Laborde told the court, “I ain’t go into the bank.”

Senior Magistrate Rickie Burnett, who was presiding, entered a not guilty plea for Laborde.

Williams and Laborde were further charged that during the same time period, without lawful excuse, they damaged one 44 x 77 inch glass window pane, valued at EC$900.94, the property of First St. Vincent bank, intending to damage such property.

Williams, again, immediately entered a not guilty plea, while Laborde told the court, “I was there but I didn’t throw stones at the window.”

The senior magistrate also entered a not guilty plea for him in connection with this charge.

He further argued that only EC$8,000 of the EC$37,000 allegedly stolen from the bank was recovered.

Cato said that the police were still conducting investigations into the matter and detectives were fearful that if granted bail, the accused men would “hinder or obstruct” the investigations as it relates to the efforts of the police to recover the remainder of the money.

He said that the prosecution was asking that the men be denied bail for at least two weeks to allow detectives to conclude their investigation.

However, Williams argued that the police had had enough time to conduct their investigation, saying that he had been in custody for sometime before he was charged.

The accused man said that during that period, the police had arrested a number of his family members, seeking information about him.

Williams said he was asking the court to grant him bail because he has to do a surgery in Georgetown.

However, Burnett asked the accused man if he could not still undergo the surgery even if he was on remand.

Williams said that if he were remanded in custody, everything would have to be done from scratch in preparation for his eye surgery.

The senior magistrate told the accused man that even if he were remanded in custody, this would not prevent him from having his surgery.

At this time, the prosecutor interjected, “All he needs to do is inform the prison authorities.”

But Williams maintained that is he were on remand, he would have to “start back over”.

He said that the same thing had happened on another occasion when he was preparing for the surgery and the senior magistrate has jailed him for six months in connection with an offence.

And, Laborde, when asked to address the court on the issue of bail, told the court that he wants to be “outside free until time come to go to court”.

The accused man said he wanted to spend time by himself.

Williams interjected, “My honour, Mr. Laborde ain’t too right in his head yo’ know.”

“Leave him alone,” the senior magistrate responded. “I know him in that he has come to my court before. I know his shortcomings. His sister is here also.”

The senior magistrate, after hearing arguments on both sides, decided to deny the men bail, but for one week, rather than two weeks, as the prosecutor had requested.

He ordered that the men be remanded in custody until next Friday, Nov. 27, when their bail will be reviewed.