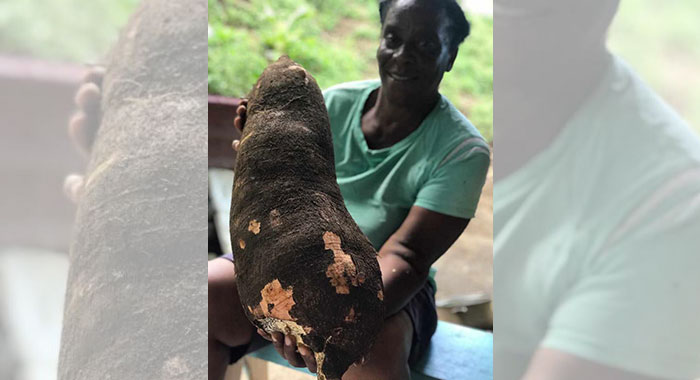 Two farmers from Fancy are elated to have reaped a 22lb cassava — the biggest they have ever seen — from a home garden in the North Windward village.

Wendy Michael and Randolph “Guava” Edwards harvested the cassava, on Tuesday, from a plant that produced five tubers, totalling 64lbs.

“This is the biggest cassava I have ever seen,” Michael told iWitness News on Thursday.

“All of the cassavas were big but when I saw the last one, me say, ‘Boy, that big eh! Me say, ‘Wow!’” Michael recounted.

“I was really excited because I have never seen a cassava big so,” said Michael, who is in her late 50s and has been farming for about 19 years.

Michael was purchasing the cassavas from Edwards and went to help him harvest them.

Edwards said he started root crop farming about five years ago and feels “good” having produced a 22lb cassava.

He said that he does not use artificial fertiliser in his garden, which has always given him good produce.

Michael said she would use the cassava to make farine for sale.