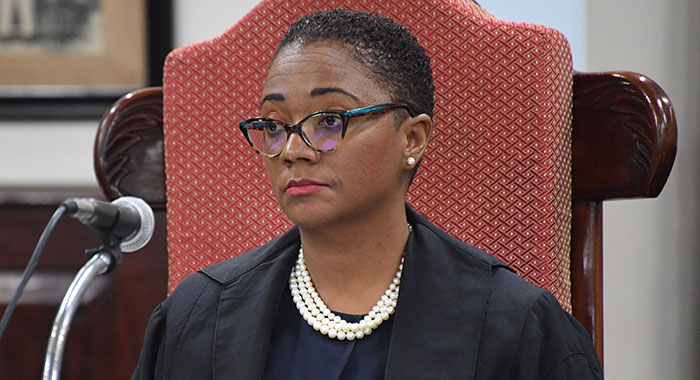 Lawmakers who spoke during Monday’s opening of the 11th Parliament congratulated House Speaker Rochelle Forde, a lawyer and former senator, on her historic election as the first female speaker of the national assembly.

Prime Minister Ralph Gonsalves, who nominated Forde ahead of her 14-8 election as house speaker, congratulated Forde on the historic first.

“I’ve been advised that you are the first woman who has been elected speaker of this honourable house. You’ve served this house before as a senator and as deputy speaker and you functioned in both roles with distinction,” the prime minister said.

He said that since then, Forde has  “grown into a more settled maturity and greater wisdom and I am sure that your many years of practising the law, despite your youthful age, at 44, that you will apply your heart to wisdom.

“I have absolutely no doubt that you will serve very well and I thank you very much for agreeing to serve in this exalted position,” the prime minister said.

During Monday’s sitting, government senator, Ashelle Morgan, a lawyer, was declared deputy speaker of the house of assembly, having been the only nominee.

“It’s the first time we are having a woman as speaker and a woman as deputy speaker,” the prime minister said.

He noted that Morgan has been practising law for 10 or so years.

“I am quite sure that she will do well. She has had some training in the state administration. She served for a few years in the tenders’ board and got to understand the workings of government,” he said.

Leader of the Opposition, Godwin Friday also congratulated the speaker on her election, saying he looks forward to working with her in the house.

“I anticipate and expect and demand that you, in the performance of your duty, will do so with the impartiality required by your position and using your experience as your training that you will conduct the affairs of the house in the highest level of professionalism and within the spirit of democracy,” Friday said.

“We are in a Parliament which is really a place for us to be talking and so debates in this honourable house should be allowed to represent fully the interest of the people who stand upon behalf of those who send us here,” he said.

“First, I want to congratulate you, Madam Speaker, on your new position in this honourable house. It is a tremendous and a momentous occasion for us to have at the helm in the speakership a woman of your stature.”

Brewster also noted that a woman is also the deputy speaker.

“So a big congratulation is in order for both women on their achievement to this honourable house,” he said.

Dwight Fitzgerald Bramble, MP for East Kingstown, another first-term lawmaker, congratulated Forde on her election, saying, she was probably anticipating what he was going to say, she being one of his former economics students.

“I have to say I am proud of you and just as you were an excellent student, I anticipate and expect you performing your duties with the highest level of professionalism and integrity and impartiality and always striving for excellence,” Bramble said.

“In the same vein, I would like to congratulate the honourable Senator Morgan for being elected as the deputy speaker as well,” Bramble said.

“I remember a few years ago both of us sat in these hallowed walls and we worked well. You have now risen to higher level and I know, of course, you can do very well in that position and I am looking forward to working with you for the next five years and I thank you very much for giving me the opportunity and I thank all the people of St. Vincent and the Grenadines for re-electing the Unity Labour Party to office where we can serve this country again.”