Camillo ‘offended’ by accusation of partisan use of COVID relief 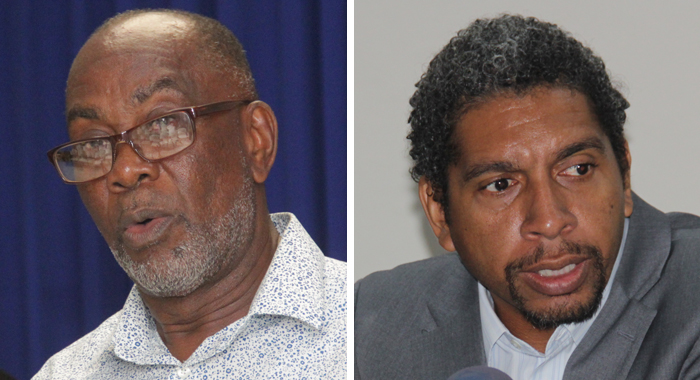 Finance Minister Camillo Gonsalves, on Monday, rejected an accusation by opposition lawmaker St. Clair Leacock that the government had used, in a partisan way, the fiscal package approved in April in response to the COVID-19 pandemic.

Gonsalves said that Leacock had suggested that the COVID-19 response of the government was either politically motivated or politically applied.

“I take serious issue with that,” Gonsalves said during the debate on the Public Sector Investment Loan No. 2 Act 2020, which was approved, without opposition support, ahead of the 2021 budget.

“When we came to this honourable Parliament with the Supplementary Appropriation Bill to deal with the COVID pandemic, we said we were dealing with three things, one, to secure the health of Vincentians — to protect them in the face of this pandemic; 2, to increase social security payments and strengthen the social security net of Vincentians because we knew there would be economic fallout; and three, to keep the economy of St. Vincent and the Grenadines ticking over,” Gonsalves said.

“We came with those things together, not sequentially like the opposition, which started with lockdown, because they’re only studying health, and then went to put the money where the pain is because they realise economy afterward. We came with the three of them together and say these are the three things we have to deal with,” he said in wrapping up the debate.

In a break with tradition, the government brought the Public Sector Investment Loan bill, seeking the approval of lawmakers to borrow money before the budget was approved.

“You know, we are not going to be caught out twice in this, you know,” Leacock said.

“We had this kind of exercise in the last Parliament in the COVID exercise. We gave you our all and you eat off our hand. You took the COVID funds and you went on a gay abandon and politicking,” he said in an apparent reference to the government’s activities ahead of the Nov. 5 general election, in which the ruling Unity Labour Party was returned to office for a fifth consecutive term.

“But the one good thing that will happen over the next few months that will buttress what we say here is that what we speak is supported by the majority of people in St. Vincent and the Grenadines. That’s a good thing,” he said, referring to the fact that the opposition New Democratic Party secured more popular votes in the election than the ruling party.

“What we are saying makes sense and you can’t have it both ways.  So when I speak, I speak with the authority of a constituency that has consistently said, ‘Major we support what you are saying and you have seen a party grow from 23,000 to 30,000 votes, continue to speak for us.

“What you are doing is wrong and we are not afraid to call you out. When you are right, we are not afraid to say that you are right and support. But on this one, we will be irresponsible to give any approval for any public sector investment programme in December of 2020 for a budgetary exercise that will come before us in hopefully January or 2021. We are putting the cart – there is no exigency!”

The prime minister said that by the end of January the estimates must be presented, as the Constitution requires.

And the finance minister contrasted SVG’s response to the COVID-19 pandemic to that of the rest of the world, saying that SVG is among 14 independent countries in the world that were yet to experience a death from COVID.

“And we didn’t do it as a result — and I am offended by the comment and I don’t know why the honourable member for Central Kingstown went there on the basis of politics.

But, Senator Israel Bruce, and opposition lawmaker rose and said that the finance minister was misleading the house.

“The Honourable Minister just said that every single farmer in this country received payment under the COVID arrangement. I am saying that is not true. And I can give examples of farmers within the constituency of South Central Windward who are bona fide farmers who did not receive that support,” said Bruce, who failed in his attempt – his first – to win that district for the New Democratic Party.

Gonsalves said that he was making the point that there was no political motivation.

“If the Honourable Senator Bruce wants to offer evidence to this honourable house that the payments to farmers were politically motivated, I will sit down and listen to him.

“But if he wants to come and talk about this or that technical issue where somebody ID expire, or somebody come late and they ain’t get their money yet, I do not want to hear that. I am talking about the statement made by the Honourable Member for Central Kingstown that the COVID relief, which has kept this country afloat, was politically motivated. That’s what I am talking about at this point.”

“We’re at 5%,” he said, adding that one reason was that the country did not shut down and also because the country is not as dependent on tourism.

“Another reason is the rapid and effective and comprehensive deployment of the social injections that we made to keep people’s lives and livelihood together…” he said.