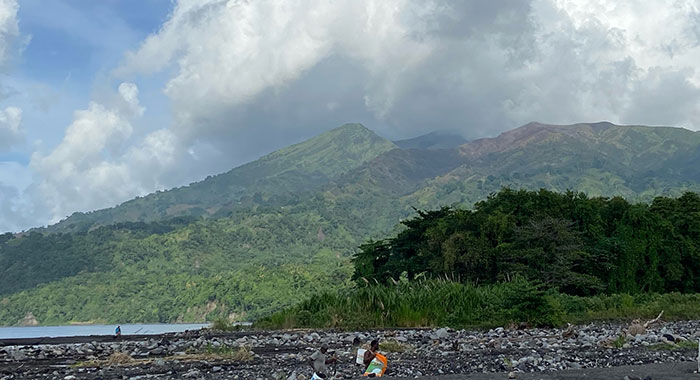 Two scientists, Thomas Christopher and Adam Stinton, from the Seismic Research Centre (SRC) based at the Montserrat Volcano Observatory (MVO) will join in St. Vincent, this week, the team from the SRC in Trinidad that has been monitoring La Soufriere as the volcano continues to erupt effusively.

They are expected to gather data from the dome and crater through temperature and photogrammetry measurements and gas measurements using a MultiGAS and spectrometer, the National Emergency Management Organisation (NEMO) said.

The team is led by Vincentian geologist Professor Richard Robertson, who has come to St. Vincent from the University of the West Indies SRC in Trinidad, where he is based.

NEMO said that the Caribbean Disaster Emergency Management Agency (CDEMA) is finalising helicopter support for the SRC team to install equipment and collect samples from the summit of the volcano.

The dome that broke through the crater floor on Dec. 27, 2020, on the south-west perimeter of the existing dome, continues to grow within the crater of La Soufriere and has an ellipsoid shape with growth expanding in a westerly direction.

No reconnaissance flight to the La Soufriere was done on Monday due to unfavourable weather conditions.

However, the SRC team led a mission, on Saturday, with the assistance of drone pilot Rommel De Freitas, to test the feasibility of using drones for aerial surveillance of the volcano.

The mission was successful and it was concluded that useful surveillance work could be done with drones from a particular location at the crater.

The SRC team completed installation of a seismic station in Owia, on Monday, and are preparing equipment to be installed at the Summit Station this week and the Fancy Station next week.

Due to the revised protocols for mass gathering implemented by NEMO’s Health Services Sub-Committee, NEMO has suspended, until further notice, all face to face community meetings to update residents on the present state of the volcano.

Information to communities will be communicated virtually.

The alert level remains at orange, meaning that an eruption could occur within 24 hours.

Persons living in the red zone — from Georgetown to Fancy, in the east, and north of Belle Isle, in the west should be prepared — have been told to prepare to evacuate at short notice, should such an order be given.

The volcano continues to exude magma on the surface and steam can still be observed from the Belmont Observatory, located in Rose Hall.

Residents of areas close to the volcano should expect strong sulphur smells for several days to weeks, depending on changes in wind direction.

NEMO is reminding the public that no evacuation order or notice has been issued and is appealing to the public to desist from visiting the Volcano until the scientists advise that it is safe to do so.