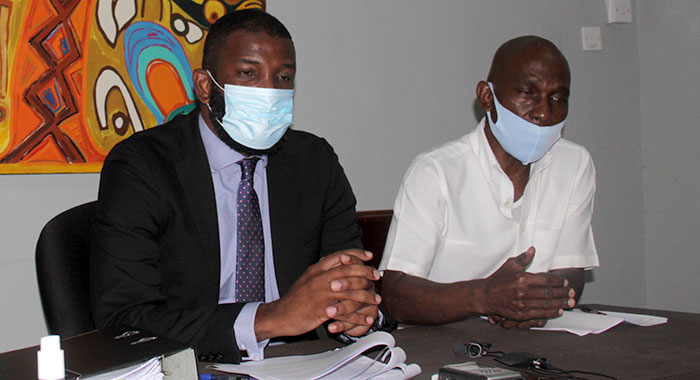 That’s the question that lawyer Jomo Thomas was asked at a press conference last week, where he said that a lawyer for the government says it does not care what the court says.

Thomas recounted the exchange with a bar colleague as he and Akin John, another member of Leon “Bigger Bigs” Samuel’s legal team, updated the media on the case Samuel brought against the state over lands at Rabacca.

“It makes a lot of sense. Democracy dies in the dark so you have to shine the light, the torchlight, the legal light, into dark corners of state action,” Thomas said when asked why bother sue the government if it is not going to honour the rulings of the court.

“And every time a case is brought and every time the government attempts to defend it and fails, its rule of law, due process bona fides are brought into question and more and more people, one by one, village by village across the country will begin to question whether this government is prepared to respond to the demands of the court and to live according to the constitution of St. Vincent and the Grenadines,” Thomas said.

Thomas, who was a candidate for the ruling Unity Labour Party administration in 2015, has successfully sued the government on a number of civil rights matters.

He said that St. Vincent and the Grenadines is “a country of laws, we are not a country of men, but, evidently, the government’s action so far is indicative of a situation where no matter what the court says, the government refuses to honour those decisions.

“But chickens would come home to roost,” he said.

Election an endorsement of gov’t actions?

It was noted to Thomas that these issues had been in the public domain for some time and that the lawyer was commenting on the heels of the Nov. 5 general elections, in which the government was returned to office for a fifth consecutive term.

He was asked if the election outcome was an endorsement of what the government is doing.

“There is a multiplicity of issues in the elections. The government went up, the opposition went up, people chose the government parliamentarians nine to six. But, if we look at the popular vote and if we understand the kind of despicable misuse of state funds in the last elections, even with that, it is clear to me and I am sure clear to others that the government won the elections and lost the country.”

The ULP was returned to office, having won nine of the 15 parliamentary seats, more than it had between 2010 and 2020, but, for the first time since 1998, the party lost the popular vote, which went to the New Democratic Party.

Thomas was told that Samuel has means or influence to secure counsel but what about others who do not have the means or even fortitude to pursue legal actions against the state.

“Well, that’s the point I was making earlier about the government’s posture, which is intended to crush people into the ground, because you have to have a certain economic wherewithal to engage counsel and to engage competent counsel who can seriously and properly challenge these state actions.

“I think that the unions – the St. Vincent and the Grenadines Teachers Union and the Public Service Union — have to be credited for bringing a number of these cases and the court, evidently, has responded and responded in keeping with the law and has continuously battered the government’s position on these cases. All we have to do is keep on pushing.”

Asked for an example of the government misuse of state funds, Thomas said:

Commenting on the issue, John said that the state’s role and purpose is intended to protect the interest of its citizens.

“And in the case of the likes of Bigger Bigs and the other individuals and parties to which Jomo has referred, it failed to do so and the court’s decisions only vindicate and affirm that reality.”

Vincies more willing to speak up

John said it may be that, in many instances, individuals do not have the wherewithal, a full appreciation, or do not know where to begin to even seek legal counsel.

“In fact, the state has its, I cannot say its finite resources, using in this unmeritorious way against its own citizens; but the likes of Bigger Bigs, the likes of the Otto Sams and others standing up, they do have an impact,” John said.

“It has an impact on the wider populace, it has impact on the wider citizenry who are able in this age of social media and I give our people credit. We are a people that are now very willing to speak up and to be critical, and that does place a check on the powers that be.

“That does place a check on the extent that they will to go to oppress or to undermine the constitutional rights of citizens and I think it should be encouraged. Yes, there is far to go but there is movement in the right direction.”

Thomas said it is important that the government honour the ruling of the court, adding that when parliamentarians, including cabinet ministers, are sworn in; their oaths include a commitment to the Constitution and laws of the country.

Meanwhile, John said that the government cannot have it both.

“You cannot, on the one hand, make a case that there is a democratic, constitutional, legal basis on which you take or form government and you are able to govern people, but by the same token, those same laws and constructional rights dictate that you must recognise judgements, decisions of the court made in the interest of your citizens and say that there is no need for you to recognise them. It is totally duplicitous. It’s illegal.”

One reply on “Lawsuits help keep gov’t in check — lawyer”