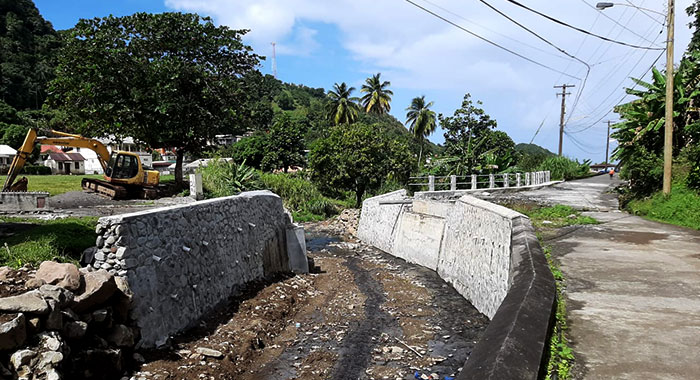 The bridge, which is under construction in Chateaubelair.

In the wake of last Saturday’s scare in North Leeward, triggered by rumours of an explosive eruption of La Soufriere, two constituents have raised questions about the town’s incomplete bridge.

Construction is underway on the bridge in Chateaubelair that collapsed in November 2017 during the passage of a trough system, resulting in the use of a one-way bypass road since then.

And, with La Soufriere having been erupting effusively since Dec. 28, a rumour of an explosive eruption Saturday night resulted in some residents of Chateaubelair and Fitz Hughes packing in anticipation of evacuation.

The two constituents are now asking questions about the incomplete bridge.

The constituents are Chateaubelair residents Troy Prince, who campaigned against the ruling Unity Labour Party in the lead up to the November 2020 general elections and Terranza Franklyn, who campaigned on behalf of the ULP’s Carlos James in the 2015 polls.

In a Facebook live video on Sunday in which he rebutted a claim by James that the reconstruction of the Chateaubelair pier is complete, Prince said that evacuation, by land or sea, could become problematic because of incomplete infrastructure in the North Leeward town.

“For years, we have been waiting for this bridge to be rebuilt and they are yet to complete it,” he said in the video in which he showed viewers the bridge, which is under construction.

“Do not slight what I am doing. Do not put politics before your safety. We need to keep Carlos James in check, man.  Somebody needs to keep him in check; very misleading, misinforming,” he commented, saying that some supporters of the ULP were looking at him disapprovingly as he made the video.

“Again, it is another project that is long overdue. Long, long overdue,” Prince said of the bridge.

“Now, this is the road that would be able to facilitate a smooth flow of traffic if an evacuation need arises,” he said of the main thoroughfare, which now has no bridge.

“So picture hundreds of vehicles…” he said.

“[Prime Minister] Ralph Gonsalves, during the election, he came, and he should be ashamed, he had to use that road to get to his rallies down here,” Prince said.

“And this is why I am saying urgency should have been given to this bridge. They have delayed years on top of years, for whatever reason, and it is still being delayed.

“… And you are trying to tell people things are ready,” Prince said in response to the comments by his parliamentary representative.

“Things are not ready. You are making an effort to get things ready and if last night people really had to be evacuated, that would have been chaotic,” Prince said.

“But this is supposed to be the main road, the bridge that they have been struggling years now to rebuild.”

He said there would be a congestion of traffic and people could be panicking.

“All sorts of things could possibly happen. Mr. Carlos James, you have to do better than this when you are trying to inform the public.”

Meanwhile, in a post on Facebook on Sunday, Franklyn asked “… what really is the evacuation plans being put in place for the people living in Fitz Hughes-Chateaubelair?

Franklyn suggested dissatisfaction with the way in which officials were going about developing or disseminating their evacuation plan.

“I seriously think they need to go to EVERY household and ensure they understand the role of each family member. Going around and asking people if they have a place in town to stay or if they have things pack in case of an evacuation is not enough,” Frankly said.

“People need to know where they running to if they have to run. Is there a list of buses/people with vehicles who will transport the disabled, sick and the weak?

“On that note is the bridge on the main road near to completion? Is Port Chateaubelair officially opened?” she said.

In an “update” to the post, Franklyn said “the Chateaubelair wharf is expected to become available In   case of an emergency evacuation”.

3 replies on “As volcano threatens, questions about Chateau’s incomplete bridge”