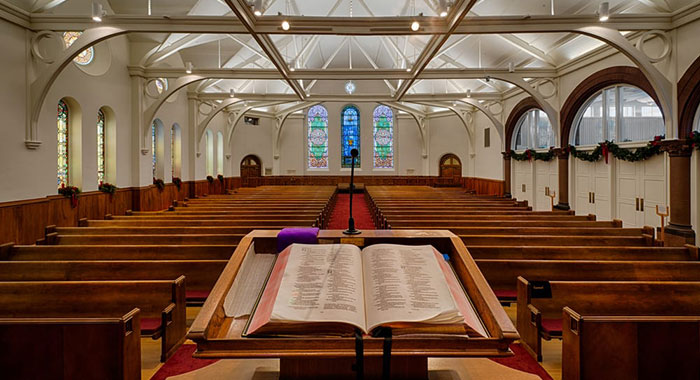 An internet photo of an empty church.

The preacher was among religious leaders who met via Zoom with health officials to discuss the impact of COVID-19 on St. Vincent and the Grenadines, particularly as it relates to churches and ways to reduce the spread of the illness via churches.

Health officials have said that churches are among the places from which clusters of COVID-19 have emerged and iWitness News understands that one church, which was slow in moving to the 10-person limit, has registered at least 20 cases.

A source familiar with the meeting spoke to iWitness News on condition of anonymity.

The source said that the cleric’s challenge to the protocols came as Health Promotion Officer Shanika John noted that the limit on indoor gatherings, including in churches, continues to be 10 persons.

It was at this point that the pastor interjected, noting that the prime minister had said that 10 persons inside a church is a recommendation and not a rule.

The priest was referring to Gonsalves’ comments earlier January, including when he said at a Ministry of Health press conference on Jan. 13:

“The first thing to note about what the Health Services Subcommittee of NEMO puts out, it has put out an advisory, a highly-recommended advisory that you have 20 outdoors and 10 indoors.

“Clearly, there is not a uniformity in terms of space for particular churches. So that if you have a church as large as the Methodist Church — and I use that as an example –where you have, we know there are four large quarters downstairs and there’s a mezzanine, there is a wing on the top, upstairs.

“If you have the pilgrims who are worshiping, coming, a register is taken of them, they have their telephone numbers, they are wearing masks, they do the hand sanitising, if you have 10 persons in one of the four quarters, there is enough space that they can spread out very far.

“The same things, another 10 upstairs; they can spread out very far. Nobody is going inside there — because it isn’t law, nobody is going inside there to lock up the pastor to say that you are having something which is illegal. We have been building this not in a narrow legalistic sense. We have been asking people to apply their common sense and the chief medical officer had been giving sensible advice.”

At Thursday’s meeting, the Chief Medical Officer, Dr. Simone Keizer-Beache affirmed that the limit on indoor gatherings, including churches, remains at 10.

iWitness News, however, understands, that as a result of Thursday’s meeting, health officials could announce by this weekend, if the government so approved, new protocols for churches, which would see the number of person allowed at worship depend on the size of the church, rather than a 10-person limit across the board.

The new protocols could also require that a register of church attendance, including seating arrangements, and body temperature on entry.

iWitness News further understands that health officials and the church leaders have acknowledged that the wider society could resist such a move and accuse the government of favouritism towards the Church.

Since late December, the government has been sending mixed messages on the limitation on large gatherings.

The confusing messages come even as the country has recorded 724 local transmission of COVID-19 since around Dec. 28.

The National Emergency Management Organisation (NEMO), which is responsible for management of the pandemic, on Jan. 8, announced that health officials were limiting indoor mass gatherings to 10 persons, and outdoor gathering to 20 persons.

However, just two days after NEMO said these limitations “must” be observed, the prime minister was on radio suggesting that the numbers were discretionary.

On Jan. 7, when the country recorded 55 new cases of the novel coronavirus — then a record high — NEMO issued a statement saying that the protocol for mass gathering had been revised effective the following day.

“The protocol for mass gatherings has been revised and effective tomorrow Jan. 8, 2021, indoor gatherings must be limited to 10 persons and outdoor gatherings to 20,” NEMO said in its statement.

However, on Jan. 10, on WE FM’s “Issue at Hand”, Gonsalves suggested that, as it relates to churches, the figure was discretionary.

To illustrate his point, the prime minister used the same example of the Kingstown Methodist church that he also used at the Ministry of Health press conference.

iWitness News understands that at  the meeting on Thursday, one pastor specifically cited this example by the prime minister as the priest argued for more than 10 persons to be allowed at in-person worship services.

Gonsalves repeated his views on the 10-person limit at churches when he appeared on NBC Radio on Jan, 13, the day on which the Ministry of Health had its first press conference for the year.

At that press conference, iWitness News noted the NEMO press statement about the 10-person limit and, citing the prime minister’s comments, asked if it was merely discretionary, depending on the size of the church.

Keizer-Beache explained that the protocols announced on Jan. 8 were to last for one week, but noted that the 10-person limit was not limited to churches only.

“… it was specifically because of the need to increase our controls and decrease the likelihood of large grouping,” she said.

Keizer-Beache added that while the focus was not only on churches, the protocol was issued “with the understanding that churches are often sites of large gathering and we know of experience elsewhere and, unfortunately, from experience here too, because of the nature of what happens in a church, as you worshiping, you are singing and you are singing, often times, without – it would be difficult to sing with your mask and when that happens, the air get shared a lot and whatever might be there might be shared”.

She further noted that there might be hugging and other physical greetings at church, which can help to spread COVID-19.

In his comments at the same press conference, the prime minister noted that there are some churches, “to put it in local parlance, two by two in terms of the size in the church, where 10 persons would be a number which you may well have a problem”.

He noted that some countries have issued regulations against churches meeting at all during the pandemic but Kingstown had not done so.

“We haven’t done that. So that people are sensible. And notice what happened,” he said, noting that an eelier advisory had limited indoor gatherings to 40 or 50 persons.

“The medical authorities decided they will bring those down because of the uptick,” the prime minister said in the Jan. 13 comments.

“People, therefore, apply their common sense and say, ‘What is it at stake here? We must do physical distancing. We must wash our hands, do the hand sanitising, we must … for the contract-tracing take the names. Do all of those things and if we do them sensibly within the guidelines, we are going to get good results.’

“If you, on the other hand, say that listen to me, hand sanitising, wearing masks, social distancing is not a matter of God and should not come into the church, well,you are wrong, because you are going to get, or likely to get, or more likely to get COVID with that particular frame of mind inside of a small church than if you have a larger expansive view as that which is advocated by the health authorities.

“That’s the point I was making, and as you know, always with a sense of balance and of patience, and calm in dealing with this matter and that is what I was explaining. Because if the Ministry of Health comes and says we are going to bring down a hammer, we are going to send people around to look to see if you have more than 10 persons in the church, you would have a rebellion. You have to persuade people and that is the context in which I was walking.”