Van drivers urged to consult before negotiating with gov’t 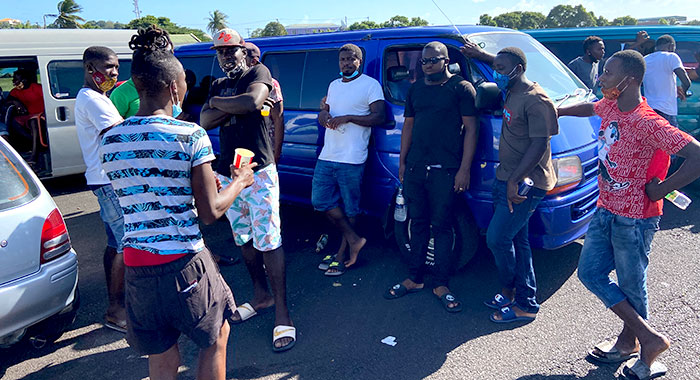 Omnibus drivers and conductors in conversation at the decommissioned E.T. Joshua Airport on Monday. (iWN photo)

Member of Parliament for Central Kingstown, St. Clair Leacock says omnibus operators should consult before negotiating with the government.

Leacock said that in seeking advice, omnibus operators could avoid situations as the one that unfolded this week, where they gave the government an opportunity to turn the public against them.

On Monday, some omnibus operators withdrew their service, one week after a law came into effect halving, for one month, the number of passengers an omnibus is permitted to carry.

However, unlike last year when the government enforced its “recommendation” that ridership be reduced by one-third, this year, the government did not announce a subsidy to cushion the impact of the law on the public transportation sector.

The law is part of efforts to curb the spread of COVID-19 in St. Vincent and the Grenadines.

However, it later emerged that among other things, omnibus operators were asking the government for a permanent subsidy of EC$500 per month, and for a waiver of all traffic tickets for picking up or setting down passengers at places other than a bus stop.

“So the van drivers submit a proposal to the government. Sometimes, they have to think, in this day and age, they have to seek consultation themselves and advice on something,” Leacock said.

“Because not because you can own a van and drive a van and finance a van means that you know all about business and management and how you approach government when you have matters at hand. Seek out advice.

Leacock said that the government cannot reverse a court decision.

“Those are awkward and difficult things. They can’t allow you to drive a van on the road without paying your licences. There are some things that they can’t do.”

But while Leacock criticised the approach of the omnibus group, he also slammed the government for focusing on the weak points of the proposal.

“But what I don’t like about that is that the government simply picks out the negative things, which are not easy to deliver, to colour the conversation, to put the public against the other positive things that they are asking for, such as give us something in the meanwhile to make up for that which we will lose.”

He said there is nothing wrong with omnibus operators asking for a subsidy in light of the change in the law.

“Absolutely nothing is wrong with that at all. And there may be even more creative ways in which you can help them beyond what they have asked for. And they should not have had to come to you. You should have called them in the first instance and we should not have been there,” Leacock said.

“Now, I find that reprehensible. To be sure the problem will be solved and will be solved to the disadvantage of the van drivers, as had happened all the time.”

Leacock, however, had his own criticism of omnibus operators.

“Because we are having a discussion, … I am using that umbrella term of van driver as if they are homogenous, unique, understanding. [They are] some of the most treacherous people you can come across as a business grouping; you could never get them all, except in a political context, to agree to one thing.

“You say we are going to strike tomorrow, withdraw our service, eight come and the other two say, ‘Wha! The eight ah you off the road, the two ah we is a chance for me to make a dollar.’

“You see one want to break away; one terrorist up and down the road. So sometimes, they are their own worst enemies because they cannot cooperate on what is best for themselves. And, sometimes, we in the society need to see how we could best help them.”

After a meeting with VINTAS on Tuesday, Prime Minister Ralph Gonsalves announced, on Wednesday, that his government would give a subsidy not less than what was given last year.

He said the government would announce for how long the subsidy will last.

Last year, the government gave, for two months, a subsidy of EC$500 or EC$600 per month, depending on the size of the omnibus.