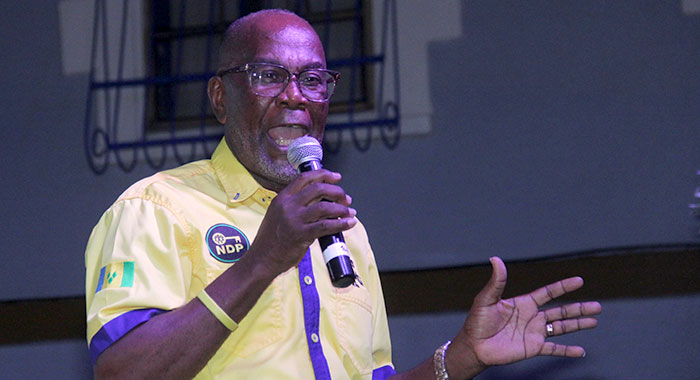 Opposition lawmaker St. Clair Leacock says that the government should have announced a subsidy for minibus operators the same time it announced the new law halving their permitted ridership in response to COVID-19.

On Monday, several omnibus operators withdrew their service and after a meeting with the government, on Tuesday, Prime Minister Ralph Gonsalves said omnibus operators will be given a subsidy not less to the EC$500 they received for two months last year.

But Leacock, who is Member of Parliament for Central Kingstown, said that the situation did not have to come to a head, had the government taken a different approach

He said on his New Democratic Party’s (NDP) radio programme on Wednesday that by asking omnibus operators to halve their ridership, they were also slashing their income in half.

“… I am going to ask you to take home half of what you normally will take, then I have to, at the same time, not after, simultaneously, say, ‘How is my action against you going to affect you and those dependent upon you?’ which could be widespread and pervasive. That’s how you think,” Leacock said.

“And so, I will come to you and say, ‘You used to be making $1 a day taking people from here to there. But I am going to ask you to give up that dollar and now take up 50 cents; by the way, you continue to provide that service.

“‘I can’t compensate for you for the other 50 cents that you are losing but I am, at least, going to try to give you five cents, 10, 15 cents, 20 cents, 25 cents and I am going to ask you to bear bob until things get better because that’s the cash I can put in your hand.

“… And I may go further and say, ‘There are other things I can do. You need to keep the van clean and fresh and so on, I can provide you with those things,” Leacock said.

Leacock suggested that the government could have offered to speak to the police, suggesting leniency for omnibus operators who might have transported one person over the allowed number.

Leacock said that as a Vice president of the NDP, a senior statesman and a person with substantial governance and professional managerial experience, “I know there is a right way and a better way to do things.

“And van drivers have a right to their political choice. No ULP, no NDP or somebody who can’t pee has a right to say that a van driver would be of this political or that political persuasion. I expect them to come to good and reasonable judgement in their own experiences.”

He said that the NDP has not had the best experience with van drivers as a bloc.

“But that’s the cut and thrust of politics. You can’t hold that against them; you just recognise what is the reality. That’s the reality.

“So they have a right to their own independent political opinion but they must be seen for who and what they are: private business investors who do a service without which the economy can be crippled…”

He said that the Caribbean experience shows that when government tries to provide public transportation, they lose money, adding that this is the case in Barbados, Trinidad and Jamaica.

Leacock said that in SVG, where the government tried to provide sea transport, “they lost a leg and an arm” and the private sector took it over “and showed government how business must be run.

“So we need them. What I don’t like, and what I find particularly distasteful — and I go back to the opening of this morning’s commentary of not thinking about the other, is how those who are in authority — the chief executive officer of this country put the nation, for convenience, against the van drivers.

“Now, I am not going to elevate some radio commentators for whom I have little or no regard whatsoever to call their names in a discussion, but they make you want to puke, you feel sick when you listen to their commentaries of how they are trying to make a van driver look like an evil monster.”

He said he had seen a video in which commuters “are unsympathetic to the fact that if the government says they (vans) can only take half that there is a need for some assistance that they must have so they can continue their regular business.

“And clearly, from a selfish point of view — this is my view at least, and let me say this is my view, not the view of the NDP here now — … they can’t appreciate and understand the point that the van drivers are making, which is a legitimate case.”

Leacock said he had a van about 30 years ago, plying the Kingstown-Vermont route.

“For every one person you see owns a van now, you can find 10 persons who owned a van before, maybe even 20 and tried it, made a penny for a while and gone.

“Because the van driving and ownership of vans is a high-risk business. By the time five, six years come, the van want change. Every time you think you going make a penny, it want clutch, it want tyre, licence to pay, insurance to pay.

“It’s high risk. Vans and fishing and block-making and bakery opening, easy in and easy out,” Leacock said.