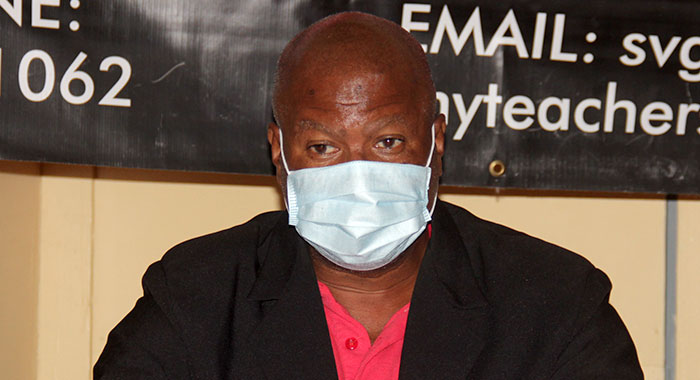 President of the St. Vincent and the Grenadines Teachers’ Union, Oswald Robinson says he had a preference of COVID-19 vaccine, but, if not, would take whichever is available.

At a SVGTU press conference last Friday, Robinson said that the union was urging members to make a decision about the vaccine after doing the relevant research.

“If it becomes available to us as an executive, we would also give due consideration. I can’t speak for other members of the executive but I can speak for myself,” Robinson went on to say.

But iWitness News asked the union boss if he was saying that he would give “due consideration” or that he would take the vaccine.

“Well, consideration is a word that is used in trade union language. It doesn’t say ‘no’ or ‘yes’. It’s not really on neutral grounds also.”

But iWitness News told Robinson that his response was equivocating — telling his members to take the vaccine, but saying that, personally, he would give it due consideration.

“Yeah, but at the same time, I am an individual also and I have individual rights,” the union leader responded.

“That’s true, but you are not speaking in your individual capacity. You are speaking as president of the St. Vincent and the Grenadines Teachers’ Union,” iWitness News said.

“If I have a choice of the vaccine though, because I would like to have a choice [as to which vaccine I should take]. But if I don’t have a preference, I would.”

In February, the country received 5,000 doses of the AstraZeneca COVID-19 vaccine from Dominica, which had received 70,000 doses from India.

The country had earlier received 20 doses of Sputnik-V “through an intermediary”.