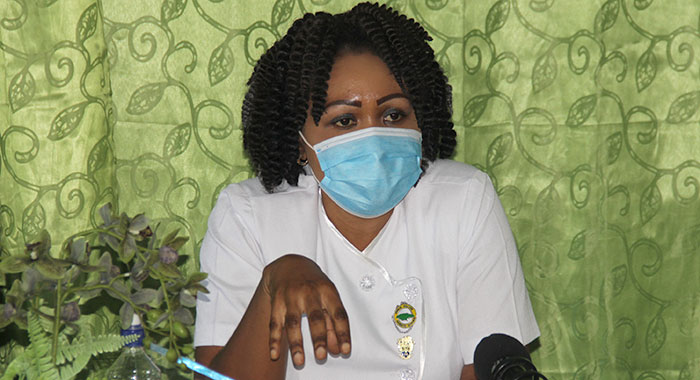 The Public Service Union (PSU) had warned about the potentially devastating impact of an outbreak of COVID-19 at the Mental Health Rehabilitation Centre, one year before the outbreak actually happened.

Last week Friday, the National Emergency Management Organisation announced that 23 cases of COVID-19, including two staff members, had been confirmed at the psychiatric hospital, located in Glen.

Since then, 103 cases — 94 patients and nine staff members — have been confirmed at the centre, and one contact of a positive case has tested positive.

But the PSU said, on Wednesday, that the situation could have been avoided had the management of the centre and the Ministry of Health addressed issues raised since March 2020, soon after St. Vincent and the Grenadines recorded its first COVID-19 case.

Shelly-Ann Alexander-Ross, the union’s spokesperson — who is also a nurse — told a press conference in Kingstown that on March 25, 2020, the PSU wrote to the Cuthbert Knights, permanent secretary in the Ministry of Health, asking him to address a number of concerns plaguing the staff at the MHRC.

“At that time, we noted that our correspondences were not acknowledged, we didn’t receive any info with regards to any meetings or anything like that,” Alexander-Ross told the media.

“At that time, it was also brought to the attention of the union that the management there was focusing on self-preservation without giving consideration to the wellbeing of their subordinates, junior employees, where they were not equipped with the pertinent kits to protect themselves from the exposure of the coronavirus.”

On April 27, the union again wrote to the permanent secretary, saying that they were “deeply troubled” because the issues that presented themselves in March 2020 had not been addressed.

She said that on May 25, 2020, the union received another correspondence from its section representative at the MHRC highlighting a number of issues.

The correspondent referred to a meeting held on 15 April, attended by the permanent secretary, management of the mental health centre and union representatives.

The issues highlighted, in respect of COVID-19, that the availability of face masks continued to be a problem and some staff were asked to buy their own masks.

“Dust masks were provided on the wards and nurses were asked to hand them over after each shift,” Alexander-Ross said.

“There was an issue in relation to admission,” she said, adding that staff was not provided with the necessary equipment to process new patients.

“There was an agreement coming out of that meeting, as far as we were told, in that admissions (new patients) would have been quarantined for 14 days before they would have been allowed to go into the general population there.

“Another issue that came to our attention was that no proper sanitisation system was in place that would have facilitated regular hand washing both for patients and workers.”

Alexander-Ross said that the union was, at that time, concerned that “in the event that there was one episode of COVID-19 [at the centre], there would have been a breakout and that would have been both disastrous for both patients and workers there”.

She said that on May 28, another letter was sent regarding unresolved issues at the MHRC.

This was basically a reminder of the meeting, the issues discussed, and the ministry’s promise to work along with the staff to address the issues the PSU had raised.

The union again noted inadequate supply of masks, no proper sensitisation area for patients and workers, the admission of patients into the general population without them completing the 14 days’ quarantine.

The union was, again, appealing for concerted efforts to help to alleviate the stressful conditions under which the employees at the MHRC were working, Alexander-Ross said.

“Face masks continued to be an issue. The staff had been given some, but the masks were provided in a bag and the staff were concerned that they were removed from the original container and placed in a bag.

“So they were looking at it from the issue of cross contamination where I would not be allowed to actually take my mask from that package.”

A hand-washing facility was installed at the front of the facility but there was none on the inside for the patients.

And two rooms were designated for quarantine and or isolation, but the 14-day quarantine period was still not being adhered to.

Because of the fast turnover of patients, there was not enough space to quarantine patients, and they were allowed into the general population before the completion of the quarantine period, Alexander-Ross said.

The union, in that communiqué, expressed appreciation that the ministry was trying to investigate the issues highlighted.

“We were basically trying to see if the ministry would address the other issues that were outlined in the correspondence.”

However, last week, there was an outbreak of COVID-19 at the facility.

But, just before that, the PSU had perceived correspondence from the section representative there, saying that a single kit, containing PPE was only given to the nurse who was the one doing admissions and the other staff were left practically exposed.

“As far as we were told, they were not given anything to protect themselves from this highly contagious disease,” Alexander-Ross said.

“When staff requested masks from Central [Medical] Stores, they were advised that there were no reported cases, and thus, staff did not need to be provided with masks.”

The union spokespersons said that the union was told that notwithstanding the outbreak of COVID-19 at the centre, new patients were being allowed into the general population without first undergoing 14 days’ quarantine.

There was still no proper or suitable area for isolating or quarantining newly admitted patients.

There was a concern that there was no shield around the nurses’ desk or staff area.

She said that the union’s information is that there is only one staff nurse present there, one nursing assistant and two nursing aides.

“The last time I counted or the last record that I got is 100 positive COVID cases. So that is the ratio that the one nurse and the one nursing assistant have to deal with.”

“So you can see we have been having dialogue with the authorities at Mental Health and the PS in effort to try to address the number of issues that the nurses, nursing aide and health workers in general, you’re facing at the facility.”

She said it is well known that COVID-19 is a highly contagious disease, which is spread through the droplets from infected persons who cough, sneeze or even talk.

“… and health care workers are frontline workers, so they are in the vulnerable group in terms of higher chance of them being affected once exposed to somebody who has COVID-19,” Alexander-Ross said. “So the issues that were raised here, according to our members or according to the person that came forward and reported them, are unacceptable, because we would have already set the base that COVID-19 is contagious; we are frontline workers, and we have an obligation to be protected,” she said.