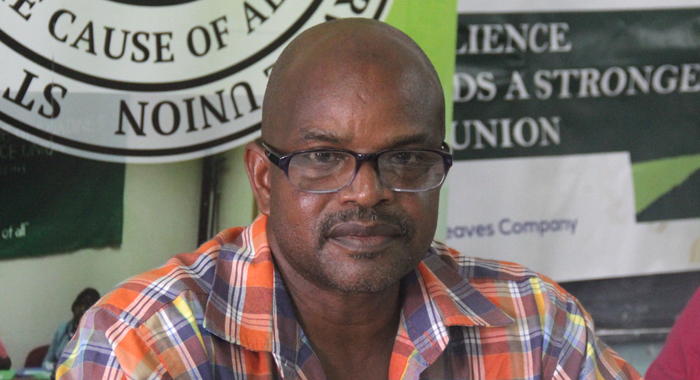 The Public Service Union (PSU) has written to the government suggesting another way of raising revenue without increasing the Customs Service Charge.

The union says that the government should collect the more than EC$100 million that tax defaulters have not paid into the national coffers.

In the 2021 Budget which Parliament approved without opposition support in February, the government said that it would increase the Customs Service Charge from 5 to 6%.

The measure is expected to raise EC$10 million this year for automatic funding of regional institutions.

But speaking at a PSU press conference on Wednesday, union leader Elroy Boucher said that the new tax measure would hit Vincentians hard.

“Vincentian consumers are facing a double whammy: an increase in the prices of goods from countries where they are sourced and an increase in customs service charge,” Boucher told the press conference.

“I want to suggest to the minister of finance that these monies that they are seeking in the short or medium term can be gotten from the unpaid taxes that are owed to the government.”

Boucher said that while the reason proffered by the government for the one percentage point increase is well meaning, “it must be noted that the implementation of same will ultimately translate into a further increase in the price of imported consumer goods…

“Furthermore, the value added tax (VAT) will also increase in the short and medium term because the compounded price and the value of goods purchased by consumers at retail outlets will be higher. And that is quite logical,” Boucher said.

“That is, you’ll be paying an increased value in addition to the increased cost of the food itself. So the Vincentian public, and I said before, and others will be paying twice given this [one percentage point] increase. While it may sound like a small increase, the impacts will not be small.”

Boucher said that the PSU is of the view that “given the extenuating circumstances, … it may be imperative for the government to refrain from increasing the customs service charge until the world is out of this pandemic mode and when the global economy begins to show an upturn performance.

“In addition, it will be more prudent to do so when prices for commodities or raw materials on the world market begin to show signs of stability. So, we think it’s important for the government to wait a while until what is happening across the globe, particularly in St Vincent, have subsided somewhat.”

Boucher said that the poverty rate in SVG is around 36% and the increased tax is likely to drive this even higher.

He said that in 2018, Finance Minister Camillo Gonsalves said that the government was owed EC$169 million in unpaid taxes owed.

The government gave a three-month moratorium during which only $8 million was collected.

The finance minister then said that the government was beefing up the legal resources at the Inland Revenue Department (IRD) to ensure that these taxes are collected.

In the 2019 Budget, the finance minister said that the IRD has completed its preparation to pursue delinquent taxpayers, using all available administrative and legal means.

He further said that this work would continue aggressively in 2019, saying that after reducing taxes and offering amnesty the government must move against those who flout the tax laws.

“Taxes should be lower, simpler and fairer but taxes must be paid. We expect more aggressive collection that needs to be approved,” Gonsalves said then.

Boucher pointed out that in 2020, the finance minister again complained about the situation, saying, “… for too long administrative inertia, intransigence and stubborn resistance to a culture of more aggressive tax collection have stymied the effectiveness” of the IRD.

Gonsalves said that this had resulted in uneven and unfair burdens being placed on compliant taxpayers”.

“In fact, all public servants firstly have to pay their taxes. We don’t even have a choice. And the minister cited in 2020, that it was unfair for taxpayers to be paying their taxes — those who are compliant. Meanwhile there’s $169 million dollars or so outstanding from persons who deliberately, in many cases, are not paying their taxes.”

The union leader noted that in 2020, the finance minister said that the IRD was resolved to address “certain geographical and occupational black holes in revenue collection, some locations and some professions simply do not pay their fair share of taxes; others disproportionately withhold VAT and PAYE monies owed to the government”.

“It is highly unfair to bring further burden to the public, to the poor, during a pandemic when there are persons, rich persons, those who have it and deliberately refuse to pay in their VAT and PAYE, or corporate taxes. Why should the ordinary man have to pay the price for that?

“Government has been set up to protect its citizens. This is a time that we need protection, financial protection. And we know that the government is burdened financially. But there’s a source for whatever is required. And if the Inland Revenue Department is creating the problem, if they are the stumbling block, then the government’s Service Commission has the authority to do what has to be done to get the right people there to collect these monies,” he said.

Boucher pointed out that the International Labour Organisation said in December, that the food component of the consumer price index (CPI) had increased at a much faster rate than the overall CPI in all regions of the world.

The article further went on to state that increases in food prices could have a major impact on the living standards of lower income households, which generally spend most of their income on food, Boucher said.

Even a small increase can confront the members of such households with difficult decisions, Boucher said, adding that the government must bear in mind a large percentage of SVG’s food supply is imported.

He further noted that the International Trade Centre (ITC) says that the 15-member CARICOM grouping, which includes SVG, imports 94 % of its food from the United States.

“Based on this information, one can easily perceive how the application of a [one percentage point] increase in customs service charge will further exacerbate the price of imported foods in St. Vincent and the Grenadines,” Boucher said.

He also noted the recent increase in the price of oil and the impact that that can have on the price of commodities and services.