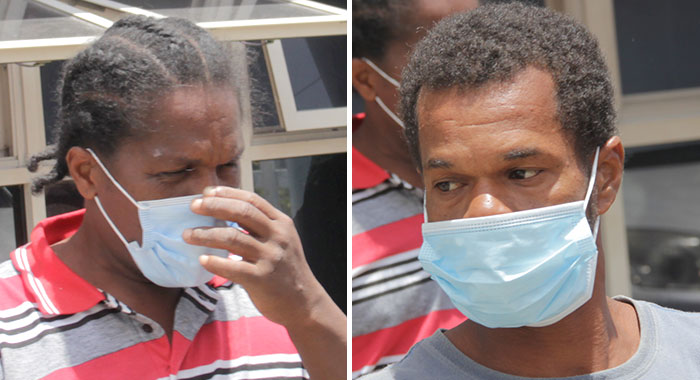 Two men accused of committing separate burglaries in the volcano Red Zone in northeastern St. Vincent have been barred from returning to their home villages, without the permission of the court, until the all-clear is given.

Senior Magistrate Rickie Burnett imposed the bar on Kim Hoyte, of Sandy Bay, and Kenny Nanton, of Point, on Monday, when they each appeared, separately, before the Kingstown Magistrate’s Court.

Nanton pleaded not guilty to a charge that between April 9 and 15, at Point, he unlawfully entered the liquor and provision shop of Kenroy Williams as a trespasser and stole a quantity of items, valued at EC$905.

Hoyte pleaded similarly to a charge that on April 13, at Sandy Bay, with intent to commit the offence of burglary, he did an act which was more than merely preparatory to the commission of the offence.

The court considered the options regarding which court Hoyte’s case should be transferred to for hearing, in light of the fact that Georgetown, which is in the Red Zone, has been ordered evacuated.

The senior magistrate asked Hoyte where he would stay if granted bail.

The defendant appeared to not understand the question, and the magistrate, said, “Sandy Bay people moved out of Sandy Bay–”

“Not everybody,” Hoyte responded, telling the court that he would be returning home, because he has nowhere else to go.

Burnett then granted Hoyte bail in the sum of EC$2,000 with one surety and ordered him to report to the Colonarie Police Station on Tuesdays between 8 a.m. and 8 p.m.

The senior magistrate told Hoyte that while there is a presumption of innocence, the court was concerned that he was returning to Sandy Bay in light of the charge brought against him.

Burnett noted that the authorities have ordered people to leave the Red Zone and Hoyte was saying he was going back there.

The case was adjourned to April 26 at a court to be determined.

Meanwhile, Nanton, who was arraigned immediately after Hoyte, had initially told the court that he was “guilty with an explanation”.

He said he was in De Volet — an area known for marijuana cultivation close to La Soufriere — when the volcano erupted on April 9.

Nation said he walked to Point and to his grandmother’s house and then he remembered they have a shop.

Nanton said he took one bottle of strong rum, three tins of beef, and tins of sausages and three packs of biscuits.

“I did not take all of these items,” he told the court, referring to the items listed in the charge.

“What would I do with all these items?” Nanton said.

He said that the items he took from the shop lasted him a night and the next day he heard that the Coast Guard was going to Owia to evacuate people.

He said he took the vessel out and registered as an evacuee at J.P. Eustace Memorial Secondary School, in Edinboro, where the shelter management found “at least about half pound of marijuana” on him and evicted him from the shelter.

On hearing the man’s explanation, prosecutor Crown Counsel Rose-Ann Richardson told the court that the matter should go to trial.

The court recorded a not guilty plea.

Richardson did not object to bail, but said the Crown’s only concern is where Nanton would live, considering he had been ordered out of the emergency shelter.

Nanton told the court that he was going to sleep at a friend’s in Lowmans, but later said he would return to the shelter.

The magistrate noted that Point is in the Red Zone, adding that persons from that community are to evacuate.

Nanton said NEMO has taken him to JPEMSS.

The senior magistrate told the prosecutor that he was considering barring the men from returning to the red zone without the permission of the court.

Nanton was granted EC$2,000 with one surety and was ordered to report to the Central Police Station between 8 a.m. and 8 p.m. on Tuesdays.

The magistrate ordered that Nanton not return to the Red Zone without the permission of the court.

He then told Nanton that his matter was adjourned to April 26.

“Which is my birthday,” Nanton said.

When Hoyte was recalled to the dock and told about the exclusion order, he said he had nowhere else to live.

“What you mean? The government has provided shelters outside of the Red Zone. Why you don’t want to go there?”

Hoyte told the court that he does not like to be around people.

The magistrate, however, made the order and Hoyte protested, saying that he sometimes has to clear the volcanic ash from the roofs of houses to prevent them from collapsing.

“If that becomes necessary, then inform the court. I think it is wise for me to have you out of Sandy Bay for the time being,” Burnett said.