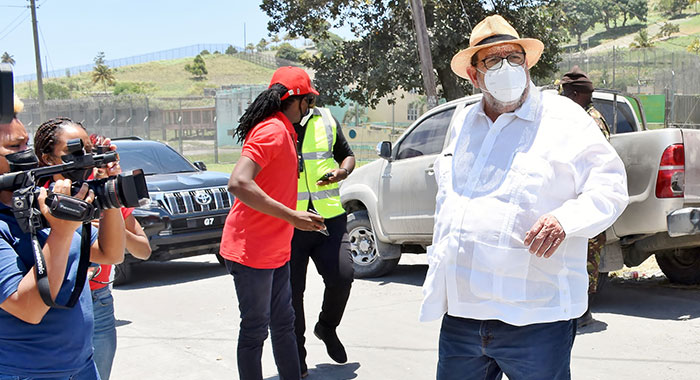 Between 40 and 50 prisoners could be released this week following a meeting of the Committee of Mercy.

Prime Minister Ralph Gonsalves told the media on Saturday that he has asked to be sent a list of prisoners who could be considered for release on compassionate grounds.

Speaking in Belle Isle outside the correctional facility his government commissioned in that North Leeward area in 2009, Gonsalves said:

“Prisoners are coping OK. There are contingency plans if we reach at this stage in relation to moving people from here but that hasn’t arisen.”

He said that the Superintendent of Prisons had reported to him “that the prisoners have been very cooperative in this matter” — an apparent reference to the impact of the on-going eruption of La Soufriere.

“I’ve requested a list from the Superintendent of Prisons, persons which are minor offences and people who haven’t paid a fine and might be there and so on, who we can release and couple of people who inside for maintenance monies and them kinda thing,” said Gonsalves, who, as minister of national security, is responsible for prisons.

“So I am trying to see if I can organise that for later this week to have a meeting with the Committee of Mercy,” he said, adding that the number of persons being considered for release “would not be a significant number”.

“I would say across the population of 400, might be 50, 40, from the list which I did a rough, cursory analysis. It shouldn’t be a lot,” the prime minister said.

“The Committee of Mercy, on these things, is usually very conservative.”