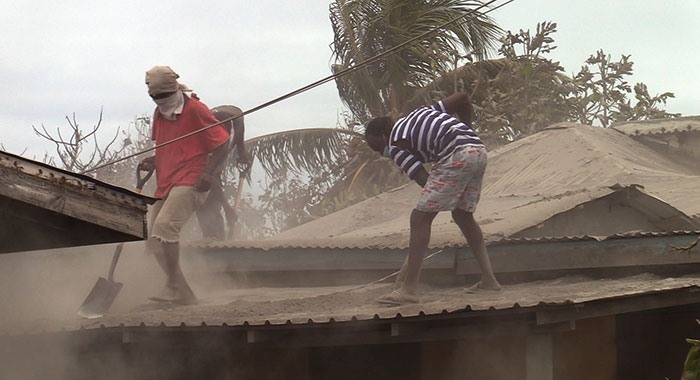 The experts monitoring La Soufriere volcano, which erupted explosively on April 9 and has had a series of explosions since, say they would suggest cleaning up, but not occupancy of the Orange Zone.

Professor Richard Robertson, a geologist and the lead scientist monitoring the volcano said on NBC Radio, on Tuesday, that the monitoring network is not as optimal as they would like as some stations were destroyed in the eruption.

Unlike before April 8, when the team gave a clear indication that the volcano was heading to an explosive eruption, “there is no guarantee that that can happen again,” Robertson said.

“So I think it is best to be cautious, at least in the next few weeks or so and let’s see if it keeps quiet. If it keeps quiet, that question would be easier to answer as we go along,” he said.

He was responding to a question from Prime Minister Ralph Gonsalves about how much warning the nation might get ahead of another explosion at the volcano.

Meanwhile, seismologist Roderick Stewart said that there would be “enough” time.

“It could be as little as hours, it could even be reaction to something that’s happening at the summit. You might actually see activity… It’s on short notice that people might have to move out,” Stewart said.

Robertson told the prime minister that he would always be cautious about people going back into the Red Zone.

“The volcano is telling us that it has entered this period where there is no clear indication that it’s … heading to an explosion though things could change quite rapidly,” Robertson said of La Soufriere, which has been quiet since its last explosion on Friday.

“That is why we have to be cautious,” he said on the daily update on NBC Radio, noting that there are certain areas in the Orange Zone that may not have been affected by heavy ash fall.

“So, yes, clean up in those areas is a good idea now, when it is not exploding. In terms of the Red areas, I would certainly not suggest any movement north of the Rabacca Dry River,” Robertson said, adding that clean up could take place in the southern parts of Georgetown when the volcano is not exploding.

“But people, if they do that, they have to bear in mind that you may have to react quickly if events pick back up and go back to explosive,” he said, even as he noted that the Rabacca area is prone to lahars (mudflows).

Robertson suggested that on the leeward side of St. Vincent, clean up could take place south of Chateaubelair.

“People have been cleaning up their roofs in Chateaubelair. I know that. But when you get to those areas you are getting into areas that are a bit more on the marginal side. Even with the activity levels now,” he said.

He said that once the volcano is not exploding, people could occupy, safely, places like Belmont (leeward) and Troumaca.

“The key things are the explosion and heavy ash. Because these areas were never going to be compromised by pyroclastic flows,” Robertson said, but suggested clean up rather than occupation of places north of Petit Bordel.

There is always the potential that the volcano could “start back up” and once it starts but up they have to move out again, Robertson said.

He, however, said that with the volcano in its current stage, it is just really the conditions of the ash that is really most hazardous.

“The thing with volcanic hazards is to minimise your exposure by decreasing the amount of time you are exposed to the thing that might put you in harm’s way. So that is why, as scientists, we do work sometimes in areas on the volcano but we minimise impact and we have certain protocols we operate under. If you have that, it is possible to do things.”

He said that the monitoring team needs to ensure that people do not drop their guard and the scientists have to make sure that the volcano is heading in a particular direction before they allow people back into the danger zone.