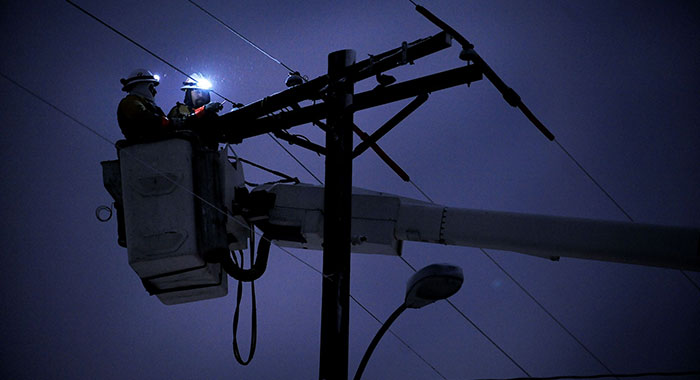 Electricity consumers in St. Vincent and the Grenadines have been placed on early alert that more power outages than normal can be expected this rainy season, as a result of the explosive eruption of La Soufriere.

Thornley Myers, chief executive officer of VINLEC, told a press conference on Friday that the major power outage on April 11 resulted from the combination of volcanic ash and water on power lines.

He said that power has been restored on the western side of St. Vincent all the way to Richmond and to Owia, in the north east of the country, though the supply to homes north of the Dry River has been shut down.

“So although there is power right up to Owia, homeowners do not have power in their homes. We decided to establish power up to Owia in an effort to provide power to the telecommunications network to facilitate communication and also to provide energy to the monitoring equipment serving sites where the scientists are monitoring the volcano.”

Myers explained that after the initial explosions of the volcano on April 9, the electricity distribution system saw a few interruptions in the early hours of the evening of April 10.

There was a significant eruption around 12:30 a.m. on April 11, which brought down the entire electricity system, and power was returned around 4:30 a.m. to all areas in which it was technically feasible to do so.

He said the disruption was caused by the combination of ash and water, adding that the volcanic ash created a conductive path that knocked out the system.

“There are significant deposits of ash on our lines and our insulators. Once rain falls, that ash creates a conductive path. So there are two lines that are naturally at a distance between them, the ash combines the moisture, forms a conductive path and you have flaws developing.”

He said this is not unusual on the VINLEC network and happens from time to time after the dry season.

With the arrival of the rainy season, similar incidents are expected, Myers said.

He said that the company anticipates the occasional outage and failure that will result from the combination of ash and moisture.

“And we hope to do our very best to make sure that consumers continue to receive a reliable and stable supply of electricity.”