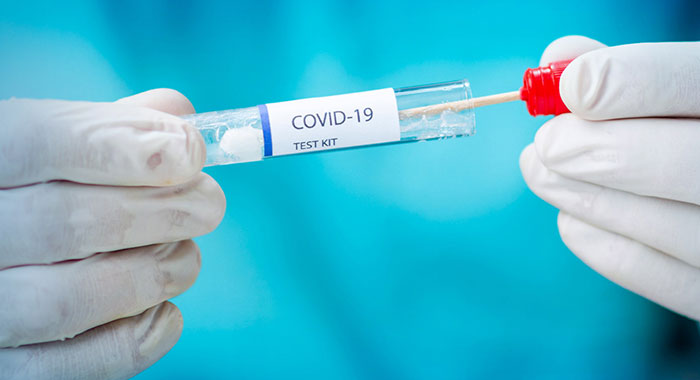 The number of persons in St. Vincent and the Grenadines volunteering to be tested for COVID-19 has plummeted.

And, an infectious disease specialist says that the 54 cases detected in emergency shelters since the eruption of La Soufriere in April could be “but the tip of the iceberg”.

Dr. Jerrol Thompson, speaking on VC3’s “Round Table Talk” on Tuesday, said that the government spent a large sum of money to establish a lab to test for COVID-19.

He noted that in the early stages of the pandemic, the lab was being overwhelmed to the point that some people had to miss their flights to Canada.

“Well, the amount of testing has plummeted because people are saying they have been told to refuse the test, not to take the test,” said Thompson, a former MP, who is a member of the COVID-19 Taskforce.

“So the point I am making, these 54 cases, we believe, are but the tip of the iceberg. And where persons are congregated together, where they may not be wearing masks as frequently as they should, in a proper way as they should, there are far more cases and we are not able to pick it up.”

Thompson said that he wanted to speak as a medical doctor and citizen and not so much as a member of the taskforce.

“I listened to the leaders of several unions: the Public Service Union, the Teachers’ Union, and the Police Welfare Association, along with their lawyers who are advising them. And they were talking about the rights of people because swabs or things are being pushed into their orifices and so forth.

“And people got that message, took it and ran with it and they have been refusing the test.”

Thompson said that from a public health point of view, “we do not have the tools to be able to make the decision as regards where to deploy services or exactly how things should be done.

“And, efforts are being made to take back that whole process in hand so that we have some control over people’s public health, over the public health of the nation and not leave it to selfish personal views even though that may be a fundamental right of your personal choice.”

He said that a person with an infectious disease should not have the choice to go around in public and infect others.

“And I’ve seen those kinds of situations before.  And from a public health point of view, we deal with those things and I feel with corona, persons, I don’t believe should have the choice as part of their fundamental freedom to infect somebody else and, ultimately, possibly kill other people.”